From The Socialist newspaper, 4 June 2014 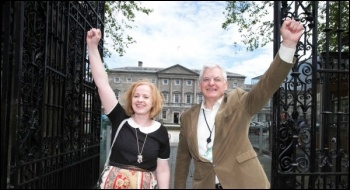 Ireland was no exception to the rejection of pro-austerity governments in the European elections. Three sets of elections took place on 23 May: local elections, European elections and two byelections to the Irish parliament. These were the first nationwide elections since the coming to power of the Fine Gael-Labour coalition in 2011.

The Socialist Party (CWI in Ireland), and the Anti Austerity Alliance (AAA - which the Socialist Party initiated following the battle against the household tax) had very successful election campaigns. Ruth Coppinger was elected as the second Socialist Party TD (member of parliament) for Dublin West, and 14 AAA councillors were also elected. Paul Murphy, while unfortunately missing out on a seat, won 30,000 votes in the European elections in the capital.

Against the backdrop of a deepening cost of living crisis, after six years of wage cuts and mass unemployment, a housing crisis and mass emigration, low and middle income voters looked to options which could express their opposition to austerity.

The extent of the defeat suffered by the government is clear. Fine Gael lost over 12% support since the general elections, while Labour suffered a near total collapse, dropping from 19% to 7% and being left with no MEPs. Fianna Fáil, while improving on its disastrous 2011 wipe-out, failed to regain anything close to its previous levels of support. The vast majority have not forgiven FF for its role in sinking the economy and bringing in the Troika of the EU, the European Central Bank and the IMF.

The electoral results have already precipitated a crisis in the government and the resignation of the Labour Party leader and Tánaiste (deputy prime minister), Eamon Gilmore, who was facing two simultaneous 'no confidence' motions. It cannot be ruled out that Labour could be forced to pull out of the government in the near future under threat of electoral extinction.

The main winners were Sinn Féin. Sinn Féin presented itself as the biggest anti-austerity force and as the best way to kick back at the main establishment parties. It received a huge rise in its vote, becoming the biggest party in Dublin. But Independent candidates (especially those seen to oppose austerity, water taxes, etc) and the fighting left also made important gains.

The Socialist Party waged a tireless campaign in the Dublin West byelection. Our campaign material, posters and manifesto tuned in with the anger of a working class community betrayed by Labour sell-outs. "Labour sold out on the water tax and austerity: don't just shout at the TV", was one of many slogans on Socialist Party and AAA posters plastered all over the constituency.

Ruth Coppinger was elected with over 12,000 votes. Achieving this, despite vicious attacks from other candidates and the swing to Sinn Féin is a testament to the strength of the Socialist Party, its ideas and record in the area, where Socialist Party TD Joe Higgins has served as public representative for nearly 25 years.

AAA stood 39 candidates in the local elections in six cities. AAA won 14 seats from eleven wards in five councils. The campaign was a huge success, and represents a breakthrough for the fighting left.

Perhaps most significantly, AAA made a huge breakthrough in Limerick city, three out of four candidates were elected. This result, along with the breakthrough in Cork city where three AAA councillors were also elected, makes AAA the only fighting left organisation with an important base and public representatives in Ireland's three main cities.

Paul Murphy, Socialist Party MEP, received just under 30,000 first preference votes in the Dublin European election constituency, finishing fifth, ahead of the Labour Party. Paul's TV appearances on debates, especially in the last week of the campaign earned him great respect and admiration throughout the city and country, as a militant and capable defender of the working class and socialist ideas.

The People Before Profit alliance (dominated by the Socialist Workers Party) also won councillors but made the sectarian decision to stand a candidate, Brid Smith, against Paul, a sitting, fighting left MEP with a record of assisting workers in struggle in Ireland and internationally. This split and damaged the left challenge. Considering this, as well as the swing towards Sinn Féin, Paul's result is a considerable achievement.

Having two left candidates altered the dynamic of the campaign from its early stages, as opinion polls showed the left challenge as split and marginal. This situation will have led many to support Sinn Féin with their number one votes, as seemingly the most viable option to elect an austerity-critical MEP for the city. The combined first preference vote of Paul and Brid Smith, who finished in seventh place, was nearly 54,000, which would probably have allowed a single left candidate to be elected. Many workers and activists outside the Socialist Party have expressed their anger and dismay at this situation.

While the 'rise' of Sinn Féin has been more limited than some polls predicted they have doubled their first preference votes in the local elections to 15.2% and now have three MEPs. This still represents a huge rise in support, based on anti-austerity rhetoric in the south of Ireland despite their implementation of austerity as part of the coalition government in Northern Ireland. Sinn Féin also benefits from anti-establishment credentials built up from the past. In this sense, the rise in its support reflects radicalisation and an openness to an anti-austerity and left political position in Ireland.

However, Sinn Féin is not a fighting socialist movement which bases itself on the active struggles of workers to transform society. Instead it makes a radical nationalist, anti-cuts appeal that does not pose a fundamental break with the rule of big business. While opposing the household tax and water charges in words, Sinn Féin was absent from the campaign of mass non-payment against the household tax, which was built and led by fighting lefts including the Socialist Party.

The perspective of the Sinn Féin leadership is to enter government following the next general election, most likely with Fianna Fáil. This has the potential to provoke mass disillusionment among workers who have placed some confidence in Sinn Féin, as has been the case with Labour. Indeed, a few days after the elections, a leading Sinn Féin spokesman told reporters that the party was opposed to a campaign of non-payment of the water tax, and would not even commit to withdrawing the tax when in government!

The electoral breakthrough for the fighting left in the local elections and Dublin West byelection must be used to prepare for struggles against the continued austerity offensive of big business via the Troika, whatever government is implementing it. These election results and breakthroughs can also serve to inject hope among working class people that austerity can be effectively opposed. The Socialist Party and AAA will now turn its attention to using this success to build for a campaign of resistance.