Link to this page: https://www.socialistparty.org.uk/articles/18710

Moves by the hardline management of SCA Logistics, based at Tilbury docks, to drive down wages by introducing zero hours contracts has sparked an 11-day strike which started this morning, Thursday 5 June.

The striking dockers, members of Unite, number about 24.

The dispute centres on fears that the permanent workforce will be replaced by lower paid agency/casual workers on zero hours contracts. The workers staged a 48-hour strike on this issue at the end of last month. 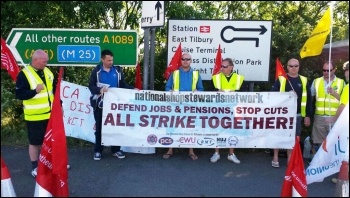