Link to this page: https://www.socialistparty.org.uk/articles/18772 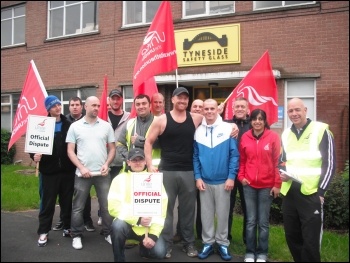 After a two week strike in October 2010 we had hoped Tyneside Safety Glass had learned a lesson.

At that time the union was on its knees, but a third year without a pay rise, along with deteriorating conditions, triggered a dispute that ended with a 2.5% rise. Union membership more than doubled.

But four years later, it appears the company has learned nothing. This year, after four rounds of negotiations leading us to believe there would be a rise, they announced a nil increase. We did a consultative ballot and the members rejected this by 101 votes to two!

We met the company again where they offered a two year deal of 1% this year and 2% next year. This was bad enough, but the deal was to be self-funding, meaning an extra ten minutes work a day. We rejected this and balloted for strike action. Our members responded magnificently with a majority of 80% for strike and 87% for action short of strike.

The company came back with a three year deal of 3% the first year, followed by 2%, then 2%, but this offer came with strings attached. Also, although there were improvements to the clocking in bonus and some minor improvements to lower rates in reality the members saw it as three years of pay cuts in real terms.

Less than a week before the strike was due to commence the company made a "final" offer. However, little had changed from the previous offer and the members rejected it by a whopping 94%, knowing it meant going on strike five days later.

The company claims to have no money for a pay rise for its employees, saying that the price of glass has risen by 24%, electric by 6-8%, and pension increases amounting to what would equate to 1% rise.

This didn't stop them giving a 14% pay rise to the highest paid director last year. This puts him on a salary which would take most of my members five years to earn! Last year they also paid over £750,000 from the company's account into the owners' trust fund.

Our members are not greedy, but we are not stupid either. We are proud of our union Unite and we attend union meetings in large numbers to debate and decide on our future. We want a one year deal, an above inflation above rise and an agreement on agency workers.

We demand what should be the right of all workers: decent pay and conditions, good health and safety standards and respect for our skills.

This version of this article was first posted on the Socialist Party website on 16 June 2014 and may vary slightly from the version subsequently printed in The Socialist.