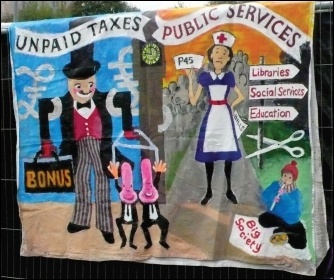 Francis Bacon, the 17th century philosopher, said that money was like muck - no good unless it is spread evenly. However, a report produced this month by the Equality Trust and Ipsos MORI shows that the rich and powerful of Britain would rather pollute all of society with their stinking midden than allow that to happen.

The report shows that there is a widespread misunderstanding about how the UK tax system overwhelmingly favours the rich.

It reveals that the poorest 10% pay 43% of their income in tax while the richest 10% get away with paying only 35%. So much for the 'we're all in it together' 'big society' of David Cameron, or the 'one nation' of Ed Miliband.

Those at the bottom also pay a greater proportion of indirect taxes such as VAT and pay four times more of their income in council tax than the top 10%.

The report notes that for the majority real wages are continuing to fall, while the super-rich are seeing their wealth pile up. In the past year, the richest 100 people in the UK have seen their wealth increase by £40 billion to a record £297 billion. The report asks, if there is a recovery, who is benefiting?

Most striking of all is that the majority of people not only think the tax system is fairer than it really is - 68% of people believe that the top 10% already pay more, despite the reality - but that most would go much further. 82% believe that the top 10% should pay a greater amount of tax, and 96% say that the system should be more progressive. So there is clearly huge support for a tax system that favours ordinary people.

These figures leave out the £120 billion in avoided, evaded and uncollected taxes - which is a further indictment of the gaping chasm between rich and poor.

It completely shatters the lies of Tory Chancellor George Osborne and other ministers that the rich have 'paid their fair share', and especially that his recent changes have lifted more of the poorest workers out of taxation.

The 'tax free' threshold may have changed, but income tax is only a quarter of the taxes paid by people; the other 75% of indirect taxes are levied disproportionately on the poor and the working class.

The report concludes with the recommendation that all parties should commit to the principle that any future changes to taxation are progressive. We support this, as well as taxing the idle assets of big business piled up in bank vaults, but it is not enough.

The huge amount of avoided and evaded wealth shows that the capitalists would rather suffocate us all in manure than give up their profits.

Taxation is just one source of anger among many Tory austerity attacks, but unfair taxes sparked the English civil war in the century of Francis Bacon and a mass non-payment campaign overthrew Thatcher's hated poll tax.

The dung heap of capitalism is fertile compost for the growth of socialist ideas and for a more equal society fit for everyone.