Brazil: New upsurge in struggles of workers and the homeless as the World Cup begins 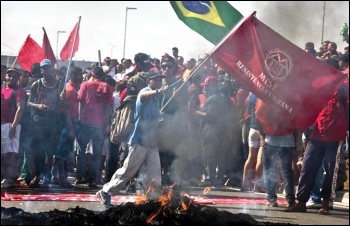 In the context of a wave of struggle and protests in the run-up to the World Cup, the São Paulo Metro workers began a powerful strike on 5 June (temporarily suspended at the time of writing).

This struggle, which goes beyond the fight for better salaries, and represents a fight to defend the right of public transport, has been at the centre of national attention. The striking workers have been subjected to brutal repression at the hands of the state.

The strike began precisely on the anniversary of the beginning of last year's massive June protests. Then, millions took to the streets in hundreds of cities throughout the country in a revolt which was triggered over an increase in transport prices.

As a result of this social explosion, different local and state governments were forced to revoke the price hikes, but they did not stop with the neoliberal wrecking and privatisation of public transport.

From June 2013, a new upward cycle of working class struggles opened up in the context of growing economic crisis and the dead end of the economic and political model of the governments of the PT (the social-democratic Workers' Party of both former president Lula da Silva and current president Dilma Rousseff).

Struggles have been more fragmented since then but have acquired a clear class character. Innumerable strikes throughout the public and private sectors have exploded. In addition to those workers with strong trade union traditions of struggle (teachers, civil servants, bank, postal, metallurgical sectors etc.), more precarious sectors, which are more difficult to organise, have also occupied the epicentre of the struggle. 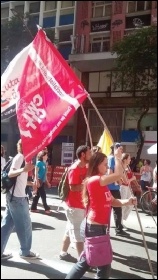 This includes the public cleaning workers in Rio de Janeiro, who staged a strike during the carnival, and faced not only the brutality and repression of the city hall of Rio de Janeiro, but also of the pro-government trade union bureaucracy.

With enormous popular support for their struggle, the "sweepers" (as they are called) won a huge victory stimulating similar struggles in other cities of the country.

This was also the case for about 28,000 workers providing services in the Rio de Janeiro Petrochemical Complex. Likewise, bus drivers in Rio de Janeiro and São Paulo staged strikes, going over the heads of their union leaders.

Right now, several sectors are in struggle and many on strike. One of the stronger strike movements is in the state universities, in particular the USP (University of São Paulo) with intense mobilisations of students, teachers and staff.

In recent weeks, the focus of attention has been on the demonstrations headed by the Homeless Workers' Movement (MTST), mainly in São Paulo. At dawn on 3 May the MTST led a massive occupation of land, intended by its owners for mere speculation. Dubbed the "People's Cup", the occupation in Itaquera today involves about 4,000 families.

The land is located in the Itaquera neighbourhood, less than four miles from the stadium that hosted the opening of the World Cup, east of the city of São Paulo.

Situated so close to a stadium that cost nearly one billion Real ($400 million), the occupation contrasts the public spending intended to boost the profits of Fifa, the major builders and real estate speculators, and the precarious living conditions of workers.

With the World Cup there was a big increase in real estate prices (of up to 200% in some areas of the city) and large rent increases. Millions of workers are forced to leave their homes and live further away from their workplace, further exacerbating the problem of urban mobility in a city like São Paulo. Therefore, the demands for the right to housing and transport are part of the same struggle for the right of workers to their own city, not of the businesses and companies.

The MTST was able to organise marches of thousands of homeless workers and allies to defend their claims. The last one took place on 4 June, when 25,000 people blocked access to the new stadium a week before the World Cup's opening. This demonstration made clear the strength of the movement that could have threatened the very opening of the World Cup.

A few days before, the threat of forced eviction from the site of Itaquera warned of a bloodbath, as the movement had opted for resistance. But shortly after 4 June, the federal government of President Dilma Rousseff sought to open negotiations and indicated that the government would meet the demands of the movement.

The land occupied by the "People's Cup" should be allocated to the construction of affordable housing with public funding under the administration of the movement itself. Once this retreat of the government is confirmed, the resounding victory of the struggle of MTST will pave the way for new struggles of various movements going forward.

It is in this context that the Metro workers' strike took place. In this case, the direct enemy of the workers is the state government of São Paulo led by Alckmin (PSDB), a representative of the traditional neoliberal right.

The government's stance on the strike so far has been to use extreme brutality with police repression of pickets at Metro stations, threats of dismissal and intransigence in negotiations.

The subway workers' union is led by sectors of the trade union left, generally linked to the PSTU and PSoL parties, and has broad support in the sector. Most of the leadership is connected to the CSP-Conlutas federation, but the union is not directly affiliated to any union federation.

Daily assemblies bring together more than 2,000 workers, out of about 9,500 in the sector. The pickets have been organised to block the activities of sections of the bosses being mobilised to operate some Metro lines, endangering the population since they are not trained. 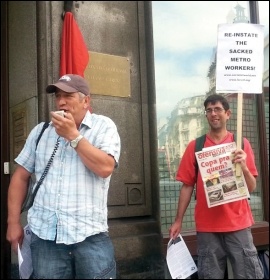 The government tries at all costs to turn public opinion against the Metro workers, but has not been very successful. The Alckmin government and previous PSDB governments are directly implicated in a massive corruption scandal over the formation of cartels and paying of bribes to state agents, involving big companies like Siemens and Alstom, suppliers of materials and services for the São Paulo Metro.

In the preparation of the strike, the union made a series of denunciations of the Alckmin government's public transport policy. The union also proposed that, so as not to harm the population with the strike, workers would cancel the work stoppage in return for the opening of the turnstiles giving free Metro access to users! The proposal was well received by the population and even served to promote debate on the proposal for free public transport, which has gained popularity since June 2013.

But the government had the support of the Labour Court which convened on a Sunday in order to deem the strike illegal, on the basis that the union does not guarantee the full functioning of the Metro during "peak hours" since this is an "essential" service. What remains of the right to strike if a category of workers are supposed to maintain 100% of their work while on strike?

The courts have imposed a fine on the union of 100,000 Real ($40,000) for each day of strike action and have declared the sacking of striking workers as legitimate.

Nevertheless, courageously, workers gathered at a massive assembly held on Sunday 8 June and decided to confront the government, media and courts, and to maintain the strike.

Right now, many sectors of the workers' movement and social movements, including the MTST and youth organisations, are mobilising to build mass action in support of the Metro workers.

The strength and willingness to fight of the Metro workers along with the organised popular support for the strike are factors which may be able to defeat the government.

Active solidarity with the Metro workers leading to a victory in this fight may be a central factor for new struggles both during and after the World Cup.

LSR (CWI in Brazil), has struggled with all its might to build the unity of the ongoing struggles in Brazil today.

Building the struggles together with the MTST while acting in CSP-Conlutas, the most dynamic grouping of the trade union left, LSR has struggled to get these two movements to act in a coordinated manner, which is now beginning to happen.

As well as this, LSR has advocated in all these forums the need for a national conference of the movements in struggle to build a common platform and a common plan of action. We have also argued that it is necessary to clearly move towards building a 24-hour general strike, organised by the unions' ranks.

The united struggle of Metro workers, teachers, the homeless and all workers and youth who are rising up today, awakened by the inequalities highlighted by the World Cup finals, is a prerequisite for the reorganisation of a combative workers' movement and socialist left in Brazil. 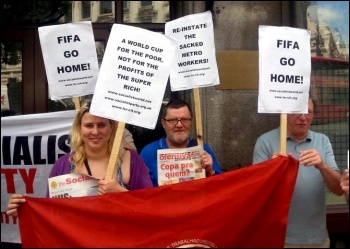 On Friday 13 June members of the CWI in capitals around the world organised solidarity protests outside Brazilian embassies in support of the striking Metro workers and against the repression of social movements during the World Cup. The protests were also in support of the "People's Cup" (a land occupation organised by the MTST - a homeless workers' movement). 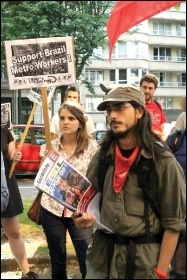 CWI members protest outside the Brazilian embassy in Belgium in support of striking Metro workers, June 2014   (Click to enlarge)

Metro workers in São Paulo suspended their strike after five days of an effective stoppage, which pushed management into making wage concessions. But the struggle for the re-instatement of 42 Metro workers, sacked for their involvement in the strike, could lead to a resumption of the action. Meanwhile, other protests and strikes continue in Brazil during the World Cup despite the exceptional deployment of state repression.