Link to this page: https://www.socialistparty.org.uk/articles/18806 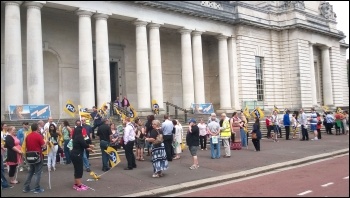 Members of the PCS (Public and Commercial Services union) working at all seven sites of the National Museum Wales walked out on strike at midday on Wednesday 18 June in dispute over pay. Management is trying to cut weekend pay that will cut the pay of some workers by as much as £1,000 a year and 10% off their final pension entitlement.

Other members of the PCS greeted strikers as they walked out of the National Museum of Wales and there was a rally of about 50 workers. A 'skeleton' service by managers kept the museum open but with staff that had hardly been trained, which jeopardises the health and safety of the public and the security of the national collection. Many members of the public expressed their support for the strike.

This attack comes on top of pay freezes which mean workers have already lost 15% in real terms over the past four years. Of course senior management's pay is unaffected - they keep all their pay and bonuses, some of them each get bonus equal to the total pay of one of the museum cleaners!

Staff will be taking further action in the dispute as well as coming out for a decent pay rise with other public sector unions on 10 July.

This version of this article was first posted on the Socialist Party website on 19 June 2014 and may vary slightly from the version subsequently printed in The Socialist.