Link to this page: https://www.socialistparty.org.uk/articles/18811 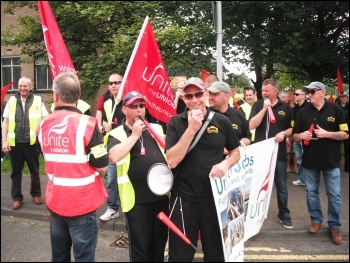 The strikers marched between the company's two factories. The industrial estate was deafened by a cacophony of vuvuzalas as a sea of red Unite union banners swept down the Teams Valley. Everyone agreed that this was the biggest demonstration seen on the trading estate, and undoubtedly this was an inspiration to other workers facing poor working conditions. 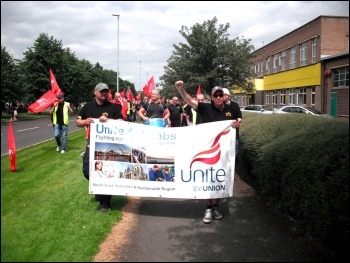 The last time TSG workers were on strike Polish agency workers were used by the company in an attempt to keep production going. This time round those same Polish workers are on strike, standing shoulder to shoulder with those who came out in 2010. This is a testament to the attitude of the strikers last time round to unionise agency workers and to fight to get them on permanent contracts. Stopping the use of agency staff to undermine the strike is an ongoing battle.

One of the strikers told me that some of the current agency workers had been given doughnuts and ice-lollies by TSG bosses. An agency worker was then told to let the strikers know they were being given treats. But as the striker said: "We don't want doughnuts - we want enough to live on!"

At the end of the demonstration it was clear the strikers were buzzing. Mark Robertson, Unite shop steward, explained that prior to the strike TSG workers classed themselves as trade union members. Now they are trade unionists who are proud of their union.

This version of this article was first posted on the Socialist Party website on 23 June 2014 and may vary slightly from the version subsequently printed in The Socialist.