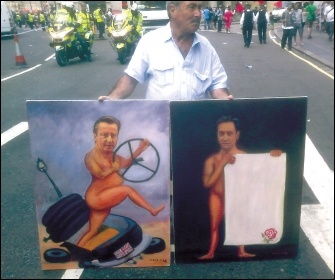 Inventive artwork on the 21 June 2014 anti-austerity demo, photo by A Tice   (Click to enlarge)

Labour leads in the opinion polls, just, but normally, a year before a general election, if an opposition is to win it should be further ahead. So, the knives are out for Ed Miliband, under attack for his low popularity ratings. With a net poll rating of -39%, he is even more unpopular than Nick Clegg!

He is clearly struggling, his posing with a copy of the Sun a recent idiotic move. Someone in Labour's Westminster bubble obviously considered it a good idea, as surely all these rough football followers read the Sun!

You'd think the Hillsborough insults and cover-up, or the inquiry into a venal, phone-tapping Murdoch press empire had never taken place.

Miliband struggles to connect with voters, appearing to belong in a world different from the rest of us. But in that sense he is no different to other establishment politicians, Cameron, Clegg and indeed Farage. The truth is it's hard to connect as a person when you offer no policies of change that people can identify with.

No point in Labour

'Does Labour stand for anything?' is frequently asked. But there's no shortage of issues with workers' living standards under attack, the greatest inequality in living memory and crises in housing, NHS funding and the private energy robbery. Despite many people's cynicism with 'politics', clear pledges to act on those issues could mobilise millions, but don't hold your breath waiting for that.

Miliband's failure to offer change appears to parallel the disastrous Kinnock leadership of the early 90s. With a 20%+ lead and Thatcher on the rocks during the anti-Poll Tax struggle, he opposed the non-payment campaign, attacked Liverpool council and expelled my popular socialist local MP Dave Nellist. The Tory press loved him for it, and no wonder. Moving to the right he allowed John Major - whose personality hardly surpasses Ed Miliband's - to win a 4th term for the Tories.

Labour's pro-market policies are a dead-weight. Blamed for the crisis by the Tories, Labour took the blame! Had Labour said 'alongside other parties we were too supportive of the market and banks and we won't do that again', they might be listened to. They have supported coalition attacks on services and living standards rather than resisted them. No wonder they are not moving clear of the Tories, despite most of the population being clobbered for a crisis made by the rich and powerful.

Labour's adoption of Tory policies including the latest attack on young people who can't find work (way to win the youth vote!) has left it nowhere to go.

While Labour candidates may fear being deprived of Westminster privileges, working people are terrified by the prospect of a Tory return, but few hold much hope of change from the 1% getting ever richer at the expense of the many.

Even when Labour summonsed the guts to challenge the energy companies they soon retreated, consequently few believe that they'd really change things and growing numbers don't even vote.

A party determined to challenge the system and change things to benefit all could mobilise huge support. But, as said, don't hold your breath for Labour. Better to help build a socialist alternative to all the establishment parties.