Link to this page: https://www.socialistparty.org.uk/articles/19007 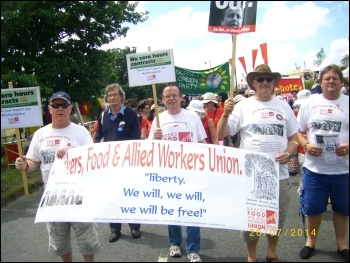 Trade unionists from across the South of England met on 20 July to remember the brave struggle of the Tolpuddle martyrs.

This year's rally marked the loss of two great stalwarts of the labour and trade union movement, Bob Crow and Tony Benn. Bob Crow's death was marked by flags and banners and a large contingent from transport union RMT on the march.

The Labour MPs who spoke met only a pale shade of applause as we enter this crucial pre-election year. A large audience listened to Owen Jones deliver a speech attacking the bosses' links with New Labour. He demanded that if the "rich want to help the poor, they should pay their taxes", pointing out how unfair the system is. There was no mention that the present Labour leadership plans to continue with austerity.

At question time, Daren Ireland, from the RMT, raised the need to support the Trade Unionist and Socialist Coalition (TUSC), and to build a new workers' party.
Katrine Williams, a PCS member from Wales, posed the need to campaign for a £10 an hour minimum wage.

PCS vice-president John McInally's speech warned the movement of bitter struggle ahead. He spoke of the necessity of joint coordinated trade union action against austerity and the need to build a political alternative. We must use the strike weapon and de-link the trade unions from the Labour Party.

A Unite member, from the floor asked: if in 13 years in power, Labour had not rescinded the most draconian anti- trade union laws in western Europe, what chance is there of Miliband's government doing so?

Socialist Party members were out campaigning and selling the Socialist, with two stalls. Our Tolpuddle '£10 mininmum wage' leaflet was very well received.

Sadly missed was John Hayes, recently passed away, who attended every year and was a long-standing Socialist Party member from Dorset.

Most union leaders on the platform were more inclined to speak about the planned TUC demonstration in October rather than escalating industrial action to smash the pay freeze.

The TUSC banner proudly joined the march, receiving compliments for its clear slogan of "No to austerity!"

As a first time attendee to the festival I helped out with the BFAWU (bakers' food and allied workers union) stall campaigning for the Fast Food rights campaign.

People took many leaflets to pass to friends and family working in the fast food industry. There was great enthusiasm for the initiative - to do as Tolpuddle's martyrs did and fight for proper representation for a new generation of workers in the industry with real trade union rights, proper contracts and proper pay.

This version of this article was first posted on the Socialist Party website on 24 July 2014 and may vary slightly from the version subsequently printed in The Socialist.