Link to this page: https://www.socialistparty.org.uk/articles/19012 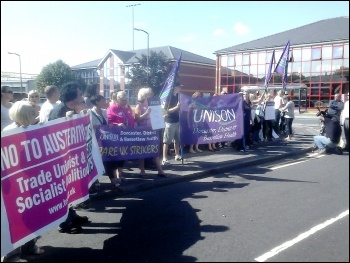 On Tuesday 29th July, Doncaster Care UK workers, members of Unison trade union, begin another two weeks of strike action. They have already taken 34 days of strike action between February and May against 35% pay cuts as a result of the privatisation of the Supported Living Service for Adults with Learning Difficulties.

Unison has declared a new industrial dispute in support of a pay claim including a living wage for all Doncaster Care UK staff. The company has already declared no pay rise whatsoever for this year. Consultative and formal ballots produced Yes votes for strike action.

The Care UK workers have been a cause celebre to trade unionists around the country. Their determination to overcome anti-union laws to continue their fight against "Don't Care UK" bosses is inspirational. To win this dispute, the strikers will need to convince new Care UK staff to join the union and join the action, and persuade Unison to launch a nationwide union recruitment drive of Care UK workers around a campaign for the Living Wage across the company.

This version of this article was first posted on the Socialist Party website on 28 July 2014 and may vary slightly from the version subsequently printed in The Socialist.