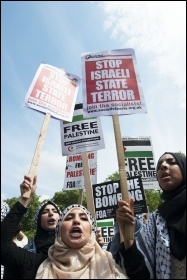 Worldwide, people have once again been shocked and appalled by the terrible images broadcast from Gaza. Palestinians buried in the rubble of their homes, hundreds of children among the dead, thousands of civilians with devastating injuries.

The office of Israeli prime minister, Benjamin Netanyahu, declared that his military "has gone to unprecedented lengths to keep Palestinian civilians out of harm's way".

Getting out of harm's way has been utterly impossible. The Gaza strip, just 46 by six kilometres in size, has been savagely bombarded from the surrounding land, sea and air.

How can the 1.8 million traumatised Gazans flee, when all the exit crossings are blocked? Inside the strip, over 200,000 people have crushed into United Nations run schools. 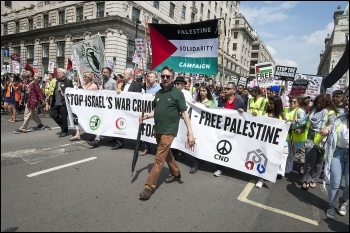 But these aren't safe: around 100 UN properties in the strip have been hit by Israeli missiles. Half of the hospitals have been severely damaged, as has the only power station, which is reported to be beyond repair for a year.

A ceasefire will come at some point, bringing huge relief to many. But it can't reverse the death and injuries, and it will solve none of the underlying problems in the conflict or prevent a new round later.

The ceasefire deal will be over the heads of the mass of people on both sides, who have no say in the content and who would prefer to see negotiations take place that could really lead to an end to the cycles of bloodshed.

Capitalist or sectarian-driven wars - from the repeated onslaughts on Gaza, to the raging civil war in Syria, or the bloody conflicts in parts of Africa - are never for the benefit of ordinary people. 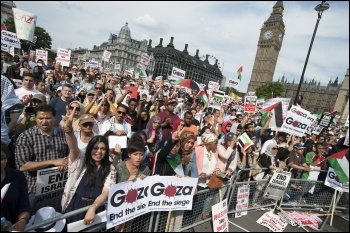 This week's issue of the Socialist marks the centenary of the outbreak of World War One, when millions of working class people were sent to die in the front trenches in the interests of rival capitalists' drive for resources, markets and power. Every war has different triggers and circumstances, but the wars we are witnessing in the world today are also a result of competing ruling classes' desire for profit and prestige.

The anti-war movements globally - at present reviving - must develop to challenge the mainstream politicians whose policies determine the fate and lack of security of millions.

The growth of socialist ideas is also essential, as the only alternative that can end the capitalism system that will always breed war, terror and poverty.

For more on Gaza, see: