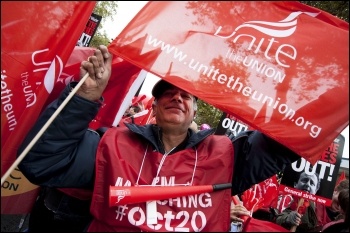 The Tories can barely conceal their glee. With a general election just ten months away, Chancellor Osborne has announced that the economy has now expanded for the sixth consecutive quarter and has finally surpassed its pre-crisis output peak, reached in 2008. So where's our share-out?

This news makes no difference to the millions who've seen wages slashed by an average of £2,000 a year since 2010, probably the greatest ever decline on record. Nor those for whom the food bank is the new lifeline, or those bullied by DWP chiefs who issue vicious benefit sanction notices like confetti.

Austerity policies have been a barely disguised wealth transfusion from the pockets of the millions into the paws of the billionaires. More people in poverty are in work than jobless and the minimum wage remains rooted below that of France, Netherlands and Ireland.

What the Tories didn't trumpet last week is that industrial production is stuck at 1988 levels, per capita productivity remains chronic and investment is £50 billion below that of 2008. Firms sit on cash mountains, but are reluctant to retool, preferring instead to exploit cheap, insecure labour.

The economy is hollowed out, still hugely reliant on services and a financial sector that remains a ticking time-bomb.

It has taken over six years for diseased British capitalism to claw itself back to this point, longer than it took to recover from the 1930s Great Depression.

This has only been achieved through slashing living standards, tax breaks to the rich, privatisations which like the sell-off of Royal Mail, give blank cheques to City bankers, maintaining extraordinary low interest rates and lubricating the economy by great dollops of quantitative easing - for which once again ordinary people will eventually foot the bill.

Permanent insecurity rather than recovery is our norm. Unemployment may officially have come down to 'just' 6.6%, but this disguises a huge growth in underemployment. Half of the jobs created in 2013 were people becoming self-employed, many driven involuntarily into this vulnerable cul-de-sac to escape dole-queue poverty.

Real jobs are increasingly replaced by boss-friendly zero-hour contracts, now standing at over 1.4 million. In the care industry alone, more than 160,000 are on these exploitative contracts, with no right to sick pay and no guaranteed right to holiday pay.

House building is at its lowest level since the 1920s. Yet over 100,000 estate agent jobs have been created since 2010, more than double the total for new manufacturing and construction jobs. London may be open to the oligarchs and private landlord racketeers, but for most, spiralling housing costs are just another nightmare.

Another week, another Tory lie, another reason to struggle to build the real recovery - the socialist recovery.