From The Socialist newspaper, 16 September 2014

Editorial of the Socialist, issue 825 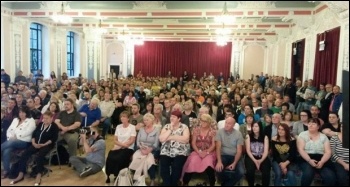 Hundreds packed into the Hope Over Fear public meeting in Dundee, photo by SP Scotland   (Click to enlarge)

Scottish referendum: "Britain will never be the same again"

"After Thursday, Britain will never be the same again," the Observer newspaper accurately declared four days before the Scottish referendum. The referendum is on a knife edge, but whichever side wins, Britain's ruling elite will have suffered a battering which will leave it permanently damaged. If the Yes campaign wins it will be an enormous blow to the power and prestige of British capitalism.

But regardless of the outcome, the independence campaign demonstrates graphically the power of working class people - the majority - to win victories even when the whole of the establishment is straining every nerve to try and inflict a defeat on you.

Even if the No vote wins, the Westminster politicians have had to promise more powers to Scotland which, when the referendum questions were set, they arrogantly dismissed. The trade union movement across Britain needs to draw lessons from this experience, and launch a serious struggle against austerity, cuts and low pay.

In the week before the referendum - from the moment it became clear that the Yes vote had a chance of winning - 'Project Fear' has become 'Project Terror'. An avalanche of threats from major banks and corporations has rained down on the people of Scotland, promising hell-fire and damnation if they vote for independence. Virtually the whole of the capitalist media and establishment have been united in their desperate attempts to prevent a Yes vote.

At the same time, for millions of Scots the referendum has become a means to express their anger at austerity and the capitalist politicians. Growing numbers of workers in England and Wales have also begun to urge the Scots on to vote Yes. They hear Cameron saying it would "break his heart" and grasp what a blow it would be to the same capitalist politicians who are implementing savage austerity in England and Wales.

The attempt to frighten Scottish voters is bound to have had some effect given the refusal of the pro-big business Scottish National Party (SNP) to answer workers' fears. The only way to do so is to put forward socialist policies - to respond to the threats of price rises and capital flight - by pledging that a Scottish government would take power out of the hands of the big-business blackmailers, through democratic public ownership of oil, banking and big business. This would then allow a massive public investment programme in affordable housing, jobs, public services and a living wage and income for all. 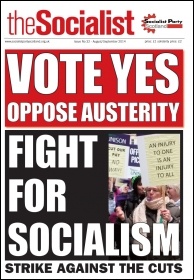 The SNP leadership, however, is desperate to appease big business. In answer to calls for nationalisation SNP leader Alex Salmond has responded by promising there would be no "day of reckoning" for "big companies drawn into the No campaign by Downing Street."

The Scottish referendum answers decisively the myth that working class people and young people are 'apathetic' and not interested in politics. As we have always explained, falling voter turnout does not reflect apathy but the absence of any major party that represents workers' interests. The Scottish referendum shows that - if they feel voting is going to make a difference - workers will turn out in their millions. Over 97% of potential voters have registered - including 16 and 17 year olds - and well over 80% are expected to turn out and vote.

The hatred of the capitalist politicians has reached new highs in Scotland. The most recent YouGov polls show that Cameron's trust rating is minus 46% in Scotland. So hated are the Tories in Scotland (with only one MP) that the leader of the Scottish Tories publicly pleaded with Scottish voters to vote No - by promising that it is safe to do because the Tories won't win the general election! Cameron came close to do the same thing, saying that his government "would not be around for ever".

As a result of the deeply ingrained hatred of the Tories it has fallen to Labour to lead the No campaign. Yet incredibly Miliband's popularity rating is only one point better than Cameron's! Nor is Alex Salmond popular, sitting at minus 20%. The Westminster politicians that have rushed up to Scotland to try and 'save the day' have not even been able to speak to the Scottish public. When they have attempted to, they have been shouted down and have instead had to speak only to hand-picked audiences at press stunts.

The most frequent chant against Labour canvassers is: "you're just Tories in disguise"! This sums up the attitude of growing numbers of Scottish workers who understand that a Labour government in Westminster would continue with Tory pro-austerity, pro-big business policies. As a result over 40% of Labour voters are planning to vote Yes.

Some workers in England and Wales are worried about a Yes vote in Scotland. This partly reflects a genuine fear it will lead to a growth of anti-English nationalism. However, the only way for the workers' movement to prevent the growth of nationalism is to fully support the rights of national minorities. This means supporting the right of nations to self-determination, up to and including independence. Only in this way is it possible to fight effectively for the maximum workers' unity across Scotland, England, Wales and Northern Ireland. 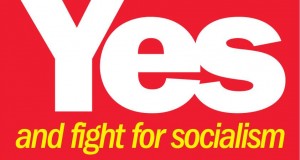 The message of Socialist Party Scotland

Another reason some workers in England and Wales fear a Yes vote is that - without Scottish voters - they will be condemned to an eternity of Tory governments. On the contrary, however, a Yes vote is likely to mark the point at which an already weakened and divided Tory Party begins to fall apart. Certainly Cameron would be finished - held responsible by his party and class for losing a large chunk of the UK. Even if - as is possible - he clung to power temporarily, because the capitalist class could find no one more suitable to try and find some stability in the crisis that would follow a Yes vote, he would be a 'dead man walking'. Without doubt the epitaph on his political gravestone would be 'the man who lost the union'.

The deep divisions that already exist in the Tory Party would also be massively exacerbated. A section of the Tory Party would turn to trying to whip up English nationalism. The possibility of further splits to Ukip, already posed, would become even more likely. Even a No vote - followed as it would be by some kind of 'devo-max' or enhanced devolution arrangement - would damage the Tories for coming so close to allowing the break-up of the union, and would set in train the same processes, albeit to a lesser degree. A narrow No vote would also be likely to lead to demands in Scotland for a new referendum especially when it became clear, following the 2015 Westminster elections, that austerity was continuing, whichever of the establishment parties wins.

Although Labour has also been badly damaged by the referendum campaign, far from lessening the chances of a Labour victory in 2015, a Yes vote could increase them. At the same time it would raise the confidence of workers in England and Wales that it was possible to have an effective struggle against austerity. Even a narrow No vote would boost workers' confidence by graphically showing the scale of opposition to austerity.

Labour, however, with its pro-austerity programme, will not be able to win enthusiastic support from the millions who want an end to austerity. It is this - not the Scottish referendum - which threatens their ability to win the general election. The most they can expect is that many workers will vote Labour 'holding their noses' in order to get the current government out of power.

Nor does the SNP in Scotland - with its pro-big business, pro-austerity policies - have the enthusiastic support of Scottish workers. Following the referendum, whatever the outcome, there will be potential to build a political force which actually stands for the kind of Scotland Yes voters want. A new mass workers' party, armed with fighting socialist policies and a democratic structure, could become a mass force very quickly. This would then provide a real and lasting answer to the lies, blackmail and fear of big business, the media and the capitalist parties. The Scottish Trade Unionist and Socialist Coalition is initiating a conference at the start of November to discuss how to build such a party.

In England and Wales as well, the Trade Unionist and Socialist Coalition is working towards creating a mass electoral voice for the working class. Events in Scotland will inspire workers in England and Wales and have the possibility of speeding up the creation of the mass workers' party which is desperately needed.

Step up fight against Tories

"Britain will never be the same again"

Campaigning for a YES vote

Keep hospital services in the NHS

Inequality and fightback in the United States

The Socialist: a tool for workplace organisers

We're Not Going Back