Link to this page: https://www.socialistparty.org.uk/articles/19613 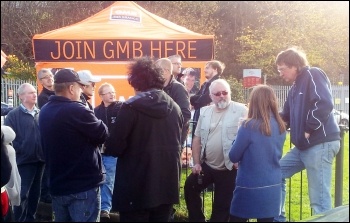 Sheffield recycling workers on strike, November 2014, photo by A Tice   (Click to enlarge)

The start date was delayed because the union had included on the notice of strike action two members who have been sacked or forced to leave the company since the dispute started!

It is management bullying and the way the contract is being run by Green Co that is the cause of this dispute. All the former senior management team have been sacked or forced to leave after questioning the way Green Co boss, Martine Laffan-Butler, had been claiming expenses and consultancy fees. These victimised managers have joined the picket line.

The GMB is concerned that public money is being siphoned out of the budget when the workers have been refused premium rates for weekend and overtime working and better welfare facilities.

The workers intend to strike until the Labour council and Veolia, who run the city waste management contract, force Laffan-Butler out.

Continuous strike action will stretch the managers still working to breaking point. Socialist Party members continue to actively support the pickets, including helping to stop commercial waste lorries running into the sites. On 5th November strikers will lobby the council meeting to demand they intervene to sort this mess out.

This version of this article was first posted on the Socialist Party website on 3 November 2014 and may vary slightly from the version subsequently printed in The Socialist.