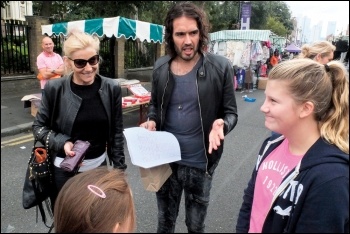 When Russell Brand first said last year that none of the main parties were worth voting for he was vilified from all sides. Commentators and celebrities were dragged up one by one to criticise this 'childish' stance. Britain has a long and proud history of democracy they said, you get to make your choice every five years and you should be happy with that. How dare this upstart point out that for most people there is no choice at all?

But his mistrust of out-of-touch politicians, uninterested in the lives of ordinary people, is shared by millions of people. Turnouts in elections had been falling long before he appeared on Newsnight. It was his call for revolution as the alternative that really struck a chord with many. Revolution is now the title of his latest book which is flying off the shelves.

Is it any wonder that people are looking for a different way of running society when capitalism offers them so little? The cosy club of politicians Brand described will get an 11% pay rise next year, their reward for picking the pockets of the working class and helping the rich get richer. No such luck for the rest of us, more than one in five aren't even paid the living wage.

That's here in Britain, a rich country - in most of the world things are even worse. Capitalism has developed such inequality that just 85 billionaires own as much wealth as the poorest half of humanity combined. The world is stumbling toward an environmental disaster but the profits of the rich are still being put first.

The list of reasons why the call for revolution has found an echo is endless. It has been clearest among young people who will be the first generation worse off than their parents, with restricted access to education, work and housing. With capitalist crisis revealing once again the failures of this system it is no surprise that people are looking for an alternative.

We've seen many of the gains our parents' and grandparents' generations won being taken away. Reforms like the welfare state and the NHS had been seen by some as steps in a gradual but unstoppable march towards greater equality and better living standards for all.

But the efforts of big business and the cabal of politicians that represent them to destroy so much of what we hold dear has proved that, while their capitalist system remains in place, they will stop at nothing to boost their profits at our expense. While we campaign hard for every possible improvement in the lives of ordinary people, only revolutionary change can make a lasting difference.

Knowing that things don't have to be like this is an important first step to making a difference. Brand's comments may have moved revolution up the agenda in Britain but they said less about what it would look like or how it could be achieved.

The Socialist Party stands for a completely different type of society - socialism. The biggest businesses that dominate the economy would be taken into public ownership, meaning the wealth created by workers belongs to society as a whole, rather than being sucked up into the pockets of the 1%.

Rather than have unelected bosses choosing whether or not to invest based on what makes them the biggest profit, we could democratically plan the economy to meet the needs of people and planet.

Workers have the power to make this change. The capitalists play no useful role in society, they are entirely dependent on the work that we do to make their money.

Need for a party

A glimpse of the potential power of ordinary people was shown in the revolutions of the 'Arab Spring', where dictatorships in Tunisia and Egypt were overthrown in 2011.

But this also showed the need for us to be organised and united. A revolutionary party that was clear and consistent about what was needed could have helped resist the siren calls of those saying it was only this-or-that leader and not the system that needed changing.

If you agree with the need to change society then the next step is to get active and do something about it. The Socialist Party organises in towns and cities across England and Wales and as part of the Committee for a Workers' International, across the whole world.

We're out campaigning every day, making the ideas of revolution relevant and real by linking them to the demands for a better standard of living, the defence of our NHS, the fight for decent housing, pay and pensions, etc.

So don't just get angry at the news or throw your hands in the air, wishing things would change, get out there and make a difference - join the Socialist Party and join the fightback!

Cuts, fees and student debt: why I joined the Socialist Party

My first experience of socialism and activism was in 2010. I was a 15 year old doing my GCSEs when the Con-Dem government announced they planned to raise tuition fees to £9,000 and scrap the education maintenance allowance.

As an academically talented pupil, I had always seen university as my ultimate educational goal.

Therefore, the news that tuition fees would be trebling was a massive blow to me. My family is not very wealthy and the fees would mean tens of thousands of pounds worth of debt.

My disgust at this issue led me to take part in my first protest. Around 2,000 school and university students marched through Bristol on that day in November 2010. It was the atmosphere and feeling of solidarity which motivated me over the past few years to continue my activism and join the Socialist Party.

Before even arriving at Cardiff University, I knew Socialist Students was the society for me. Now, as president of the society, I am organising protests, marches and election campaigns. I'm also leading discussions on opposing the continuing austerity onslaught.

We might have lost that first battle against tuition fees in 2010. But I know that, through being a member of the Socialist Party and Socialist Students, I can strive to make a difference and demand change.

How can Russell Brand's call for revolution be achieved?