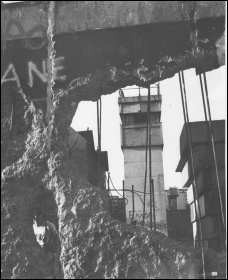 While, for millions, the 1989 opening of the Berlin Wall is celebrated as a great victory for democratic rights, the official celebrations to mark its 25th anniversary have been dominated by anti-socialist propaganda.

This has sought to hide the fact that, initially, the revolutionary movement that opened the Wall was pro-socialist and that it was only afterwards that hopes and illusions in capitalism came to dominate the movement in East Germany.

But the official propaganda buries the initial revolutionary and pro-socialist character of the movement in autumn 1989 and make it seem that, from the outset, its aim was to bring back the capitalist market via uniting with west Germany.

Internationally the 9 November anniversary of the Wall's opening was exploited by many governments to allow them to appear that they always were on the side of 'democracy' and free travel. This is complete hypocrisy.

As far as free travel is concerned, in many ways it is increasingly restricted to those with money. Internationally, visa restrictions are being continually tightened while the Berlin Wall has been replaced by new barriers east and south as the European Union has worked to construct a 'Fortress Europe'.

But the monstrous border, with its killing zones, that the East German regime (GDR - the German Democratic Republic) maintained, alienated millions and allowed the western powers to paint a horrible picture of a 'socialist' country which used force to keep its population inside.

Initially, immediately after the World War Two, there was some enthusiasm for the creation of the GDR. Partly this reflected the then widespread support for socialist ideas throughout Germany. The GDR was at first seen by a section as more 'anti-fascist' and 'progressive' than West Germany which was clearly capitalist and had a large number of ex-Nazis in key positions in the economy and state.

But the GDR, while not having a capitalist economy, was not a socialist democracy. Its regime was modelled on that of Stalin's USSR and run by an elite group of bureaucrats, something seen in the brutal crushing of the 1953 workers' uprising and the continuing suppression of any serious criticism or dissent.

This led to increasing numbers moving to the west and, in 1961, the regime building the Berlin Wall to complete sealing off the inner-German border.

For some decades the GDR developed but then, like in other Stalinist states, top-down bureaucratic methods began to strangle the economy. Internationally this led to the crisis gripping many Stalinist states in the 1980s, particularly in the then Soviet Union, where Gorbachev's attempts at reforms helped stimulate movements from below.

This development had a big impact in the GDR and other countries especially the greater toleration of open debate, something which the GDR leadership tried to resist.

One of the sparks of the 1989 protest movement was the rigging of the local elections held in May that year. Also, there were suddenly opportunities to leave the country as first Hungary, and later the then Czechoslovakia, opened their western borders.

For those living in the GDR a crucial difference with other Stalinist states was that West Germany would immediately grant citizenship and full welfare benefits to any East German citizens who moved there.

This was the background to the regular protests that first began in Leipzig on 4 September and rapidly gained strength particularly after clashes around the celebration of the GDR's 40th anniversary at the beginning of October.

Soon a tremendous momentum developed. Despite attempts at rep-ression the protests kept expanding. The authorities began to back down from using force which gave the protesters growing confidence.

The largest single protest was the demonstration of up to a million people (out of a 16.1 million population) in East Berlin on 4 November. However this protest is downplayed in the official story, even though it played a key role in the events that led, five days later, to the opening of the Wall.

The fundamental reason for downplaying it is simple. Its demands were not just for free elections, free media, freedom to travel, but also for "democratic socialism". Opinion polls at that time showed majority support in the GDR for socialism in some form.

Unfortunately, there was no force that was proposing concrete steps that were needed to build "democratic socialism". The opening of the border made many East Germans see the strength of West Germany and they questioned what future the GDR would have on its own.

West Germany's attraction was that then it was the world's third strongest capitalist power. In addition, joining West Germany was increasingly seen in the GDR as the quickest way to get rid of the old GDR elite.

At that same time, West German leaders saw both a threat and an opportunity.

In mid-October 1989 Schäuble, then interior and now German finance minister, told the Financial Times of the danger of "uncontrolled events" in East Berlin and a threat of the "destabilisation" of the GDR.

But also the German capitalists saw the chance to reunite the country under their control as well as strengthening their international position.

On 8 November the first calls of "Germany, Fatherland" were heard on a 400,000 strong Leipzig demo. Soon this call was getting more and more support and the West German leaders decided to seize the opportunity to campaign for unification. This won massive support in the March 1990 GDR election that paved the way for unification the following October.

In many ways this was, in effect, a takeover. The idea in West Germany's Basic Law that, should Germany be united, there must be a discussion on a new constitution was dropped. The German cap-italists feared that there would be demands for a new constitution to guarantee social rights, like jobs, housing, etc.

Instead unification meant a German version of 'shock therapy', the rapid and brutal reintroduction of capitalism, seen in many other former Stalinist states.

As the planned economy was dismantled the former GDR's industrial production dropped by two-thirds between 1989 and 1991. Industrial employment dropped from 3.2 million to under 1 million by mid-1992.

But the big difference between the experience in East Germany and the other former Stalinist states was that the German ruling class pumped huge amounts of money into the area to buy social peace.

Between 1991 and 2013 the German government spent two trillion euros (£1.6 trillion) in the former GDR. Yet still today eastern Germany's GDP (total output) per head is below the west's level.

The experience of the last 25 years has not fundamentally weakened the general idea in East Germany that socialism is preferable to capitalism.

Recently the German weekly Die Zeit published the results of an opinion poll showing that today well over 70% of east Germans believe "socialism is a good idea, but was badly implemented", an opinion currently shared by 45% of west Germans.

This illustrates the potential that a socialist movement to change society has in Germany. It is one of the reasons why Die Linke (the Left Party) is strongest in today's eastern Germany, although for this party socialism is just a vague long-term goal and its leaders have made clear that they want to operate within capitalism.

However it does not mean that the aspirations for a genuine socialist democracy are buried. The continuing turmoil in the capitalist economy will result in a questioning that will provide fertile soil for the ideas of socialism to grow and become the basis of a movement for change.

1945. After the defeat of the Nazis, occupied Germany is divided between Western Imperialism and the Stalinist USSR. Start of the Cold War.

1948-49. Antagonism between the two blocs leads to Stalin imposing a blockade of West Berlin. The West drop air supplies to the enclave.

1949. In May the USSR lifts its blockade. Also in May the western capitalist Federal Republic of Germany (West Germany) is declared followed by the establishment of the German Democratic Republic (East Germany) in October - a mirror image of the Soviet Union.

1953 June. Building workers in East Berlin strike against draconian working conditions and low pay. It quickly develops into a widespread revolt across East Germany against Stalinist rule. Soviet tanks crush the rebellion. Hundreds are killed and the workers' leaders executed.

1950s-1961. 3.5 million East Germans defect from the GDR undermining the economy and the SED 'communist' party.

1961 August. East German troops are ordered to seal off the border crossings between East and West Berlin. Construction of the concrete wall begins. In response the US moves 1,500 troops through East Germany to West Berlin.

1963 June. US President John F Kennedy delivers his 'Ich bin ein Berliner' speech in West Berlin as a policy statement to the USSR declaring US defence of West Germany and West Berlin.

1980s. Decades of bureaucratic rule drive the nationalised economies of the USSR and Eastern Bloc countries into an impasse. In response, 'Perestroika' - political and economic reform - is introduced by Soviet leader Gorbachev.

1989. An easing of travel restrictions and renewed political protests in East Germany.

9 November. The Wall is breached when the East German government announces that all GDR citizens can visit West Germany and West Berlin. In the absence of a democratic workers' alternative, East Germany effectively collapses.

1990 3 October. East and West Germany are formally unified as a capitalist state.

Lambeth & SW London Socialist Party: 30 years on - Why did the Berlin Wall fall?