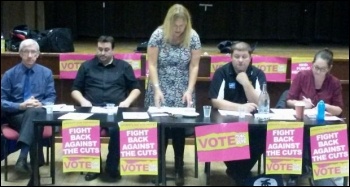 Speakers at the Scottish TUSC conference, November 2014, photo by SPS   (Click to enlarge)

Some of the leaders of Scotland's most combative unions were gathered at a significant Scottish Trade Unionist and Socialist Coalition (TUSC) conference on 1 November.

Gordon Martin, Scotland organiser of TUSC supporting transport union RMT, spoke from the platform. "All the politicians in Scotland - whether Labour, SNP or Tories - have failed us. That's why standing our own candidates is so important."

John McInally, vice president of civil service union PCS, explained that austerity was the only choice on offer from the capitalist parties - including the discredited Labour Party. "Labour is in long term crisis in Scotland, as we see by the resignation of Johann Lamont. If Blairite Jim Murphy is the answer to this crisis, we're asking the wrong question."

Cheryl Gedling, a member of the PCS national executive committee, chaired the meeting - which was also attended by leading members of the union's Scottish Committee. The leadership of left wing branches of public service union Unison, including Glasgow and Dundee, attended as well.

Also taking part were community activists, including successful anti-bedroom tax campaigners from Castlemilk and Easterhouse. In all, more than 70 trade unionists, socialists and anti-cuts activists discussed the way forward following the independence referendum.

Despite the huge working class Yes vote in the referendum - a revolt against austerity and the establishment - the cuts juggernaut has continued.

The SNP bears much of this responsibility. A number of left organisations and individuals in Scotland have called for an SNP - or so-called "Yes Alliance" - vote next year.

All the organisations that take part in TUSC, including the RMT, called for a Yes vote in the referendum. But we cannot support candidates who are not prepared to refuse to implement cuts.

Jim McFarlane, secretary of Dundee City Unison, reminded the conference that Dundee delivered the biggest Yes majority in Scotland. Yet within a week the SNP led council announced a further £8 million in cuts.

"This week has seen that figure become the tip of the iceberg. Now cuts of four times that - a full £30 million plus - are being prepared between now and 2017. They will decimate public services in Scotland's Yes city. This cannot go unchallenged."

Instead the conference unanimously passed a resolution committing TUSC to standing candidates in the 2015 elections. We pledge to set no cuts, needs based budgets - and fight for socialist policies like public ownership, an end to anti-union laws and a living wage.

Scottish TUSC will hold another conference in late February to finalise its manifesto and list of candidates. In the meantime, the expanded steering committee will be writing to trade union organisations, socialist groups and others. We invite all such groups and individuals to take part in building a principled electoral challenge to austerity in May 2015.

The Trade Unionist and Socialist Coalition (TUSC) is an electoral alliance that stands candidates against all cuts and privatisation. It involves transport workers' union RMT; leading members of other unions including the PCS, NUT and POA; the Socialist Party, and other anti-cuts and socialist groups and individuals.