From The Socialist newspaper, 9 December 2014 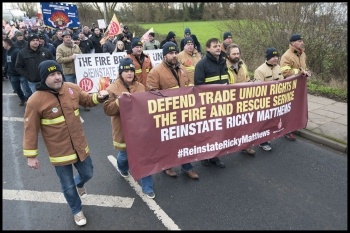 Over 1,000 firefighters from across the UK gathered in Aylesbury, Buckinghamshire, for a national demonstration on 9 December, their latest day of strike action over pensions.

Banners could be seen from Northern Ireland, Devon, Hull and London, among many others.

Fire Brigades Union (FBU) national executive rep Ricky Matthews was employed by Buckinghamshire Fire Authority. He was sacked for taking part in the last round of strikes. 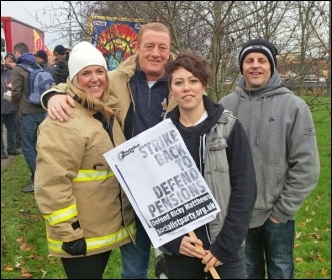 FBU general secretary Matt Wrack said: "We are here because we are not giving up on the pensions strike. We are sending a very clear message that this union doesn't allow people to be victimised without standing up for them."

The strikers marched to the fire authority headquarters.

The government's attempt to cut firefighters' pensions includes changing the retirement age from 55 to 60, which is certain to result in the workers failing capability tests and being dismissed before they retire. 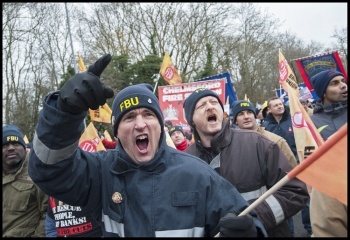 For video, go to:

Aylesbury TUSC: The socialist case against the EU