Link to this page: https://www.socialistparty.org.uk/articles/20027

Tristram Hunt confirmed Labour's contempt for teachers with his tweets to a concerned South London parent. On the day Cameron is to announce greater moves to academies which threaten teachers' working rights, Hunt insults teachers and concerned parents.

Hunt, Labour's shadow education secretary, tweeted to a parent and a teachers' group to "stop moaning" and "do some work" in response to a query about the details of Labour's education policy. 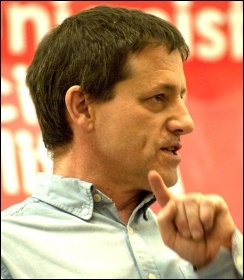 Martin Powell-Davies, a member of the national executive of the National Union of Teachers, the largest teachers' union, said:

"The Tories' latest announcements show that they are determined to take the whole of education out of democratic local control by turning even more schools into academies. Clearly Labour has ruled out repealing any of the Tories' major school reforms if it forms the next government. In Lewisham, however, teachers and parents are determined to stop these attacks".

Martin is a teacher and active campaigner in Lewisham, South London. He is also one of two members of his union's executive standing as parliamentary candidates for the Trade Unionist and Socialist Coalition (TUSC) - which is more on that executive than for any other party. Martin is challenging in the Lewisham West and Penge constituency.

Martin explains why as a teacher trade unionist he is standing:

"Teachers' strike action has already seen off one pro-academisation education minister. Both Nicky Morgan and Labour's Tristram Hunt should take note. Building on this includes standing to give a voice to the millions who oppose academies".p>

Martin explains the fight against academies in Lewisham:

"Campaign meetings have heard from students, parents and staff who know from their own experiences that academies are no solution to educational issues. In fact, they make things worse. Staff pay and conditions are threatened. Parents complain about how their children have been treated in schools that are like 'exam factories'.

"Lewisham NUT has now balloted its members in five schools for strike action against the threat that their employer might change to an Academy Trust. A first day's strike is due to be called on Thursday 12 February. News has just come through that one of the schools, Bonus Pastor, has announced that it isn't going ahead with its academy plans! So that's one down, four to go!"

If only @TristramHuntMP @uklabour would tackle that poverty by opposing cuts, austerity. Easier to blame teachers @natalieben @TUSCoalition

Martin recently attended the conference of the Trade Unionist and Socialist Coalition that launched the biggest left-of-Labour challenge since 1945 on Saturday. TUSC is well on its way to fulfilling its aim to field 1,000 candidates in the local council elections and to stand 100 candidates for Westminster. Read his report here.

The conference featured former Labour councillors, now with TUSC, who had been kicked out of the party for voting against cuts.