From The Socialist newspaper, 4 February 2015 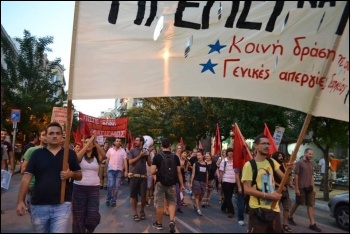 The new Syriza-led government has announced a series of policies that will come as a huge relief to Greek workers after years of brutal austerity measures that have driven many into penury. The new measures include restoring the minimum wage to pre-crisis levels (€750 a month); raising low pensions; abolition of hospital visit fees and prescription costs; ending the forced sale of homes of people who cannot keep up with mortgage repayments; scrapping planned privatisations (including the energy sector, airports and docks); re-employing public sector workers who have been sacked; abolishing the civil service 'evaluation' system which was created in order to provide continuous layoffs; re-establishing ERT as the state broadcaster and reemploying its workforce; and providing citizenship for children of immigrants born and raised in Greece.

Although these measures have to be passed through parliament, Greek workers feel that, at last, their self-confidence and dignity is being restored. The symbolism of Alexis Tsipras being made Prime Minister, without a religious oath, and his visiting a monument to communist fighters massacred by the occupying Nazis in 1944, is not lost on workers either.

All together, these initial measures (limited and partial as they are) fly in the face of decades of harsh neo-liberal so-called 'consensus', and the pro-austerity agenda of the eurozone and bosses' EU. These reforms are the by-product of the herculean mass struggles of Greek workers over several years, including over thirty general strikes. Although this did not prevent massive cuts, due to the role of conservative union leaders, it did politically radicalise millions of workers, preparing the ground for this major electoral upset.

The Syriza government's initial announcements also expose the craven position of traditional parties across Europe, including the former social democratic parties. When in power they carry out austerity and other anti-working class measures on the supposed basis that there is 'no other choice'.

Predictably the markets reacted negatively to these measures, with stocks in Athens falling to lows not seen since the worst of the debt crisis. It is reported that Greek deposit outflows sped up last week to €11 billion for January. Government ministers sought to downplay the prospect of a clash with creditors.

The Greek Communist Party (KKE), trying to excuse its sectarian approach (which saw it refuse to form a coalition government with Syriza) dismissed the reforms as mere 'peanuts'. While the new announced measures do not amount to a socialist programme - which would include repudiation of the debt, heavily taxing the rich, imposing capital and credit controls and the state monopoly of foreign trade, and taking the commanding heights of the economy into democratic public ownership - they will be very positively welcomed by workers in Greece and across Europe. These developments will act as a boost to the anti-austerity opposition in Spain, Portugal and Ireland, in particular, even bringing forward elections in some countries.

The EU ruling elites are reportedly astonished because they had reckoned on a 'centre-right' government coming to power in Greece, which would have continued the policy of conceding to the demands of the Troika (ECB, EU and IMF). But Prime Minister Alexis Tsipras came to power under pressure from the working class to carry out his basic pledges of cutting Greek public debt, raising wages and halting spending cuts. He claims that all this can be done while remaining in the euro but European leaders have warned ahead of negotiations on Greece's debt that Tsipras will have to choose which of those goals to aim for.

Greece has about €320 billion of outstanding debt. It has to refinance Treasury bills on 6 February, of around €1 billion and another €1.4 billion on 13 February. Syriza said it does not seek confrontation over the debt and will seek a deal over rescheduling repayment. Is it possible that Germany's Chancellor Merkel will agree to negotiations that give some leeway to Athens? Merkel is under domestic pressure not to 'waste' more money on bailouts but also faces a European ruling elite increasingly divided over the best way forward. The Governor of the Bank of England recently criticised the results of the Troika's policies and warned of another 'lost decade' in Europe. As an indication of the stagnant situation facing the eurozone, the European Central Bank was compelled to launch a bout of quantitative easing (money-printing).

Even if Merkel is prepared to make some concessions to Athens regarding debt repayment schedules and some debt relief, there will be strong political pressure from ruling parties across Europe not to give too much to Greece. They fear it would set a precedent that would threaten to unravel the whole austerity 'consensus' and create 'political contagion', giving a massive boost to anti-austerity opposition across Europe.

Prior to his election, Tsipras said if no deal can be made with Brussels and there is an attempt to force Greece out of the eurozone or if the EU attempts to stop Syriza's anti-austerity measures he will call a referendum.

It is not just a question of polls or parliamentary arithmetic. As the response of the markets and EU governments to Syriza's measures show, the ruling elites will fight every concession or reform for the working class. Even if Merkel and the European ruling elites have to grudgingly concede to Syriza's new measures, they will come back at a later stage to try to wrest away these gains, and in the meantime will work to destabilise, undermine and tame the Syriza government. Winning and maintaining even limited gains for the working class requires that they are part of a struggle for a full socialist programme and that the working class is mobilised, in the workplaces and communities, to challenge capitalism and to appeal for solidarity with workers across Europe.

Why did Syriza and KKE fail to reach agreement?

Syriza has formed a coalition government with the Independent Greeks, a party that emerged from a New Democracy split and is faithful to the capitalist system. Syriza's cooperation with such a party is a dangerous trap!

Syriza moved in this direction after having invited the Greek Communist Party (KKE) to discuss the possibility of some form of collaboration in forming a left government. The KKE refused, including a clear and public refusal to give a vote of confidence to a Syriza government.

The KKE justifies this refusal on the basis of "ideological and political differences". But what prevented the KKE saying yes to working with Syriza under certain conditions?

It could have proposed, as a minimum for cooperation/vote of confidence, a series of measures such as the reinstatement of the minimum wage, of pensions and labour relations, investment in education and health, for an end to privatisations, for the renationalisation of all privatised public services, for the banking system to pass to the ownership, control and management of the workers etc. (Some of which the Syriza government has actually promised to start carrying out.)

The KKE could have given a vote of confidence to the Syriza government, as long as it carried out pro-working class policies, but at the same time maintain its full political and organisational independence. The Syriza leadership would thus have had no 'justification' (or alibi) to turn to the populist, right-wing Independent Greeks.

At this stage, many Greeks regard coalition with the Independent Greeks as the only option for Syriza and that the KKE leaders contributed towards this outcome. But it will be unstable.

In the initial period, the Independent Greeks will probably agree to a number of popular policies - already the coalition government is in the process making a series of reforms welcomed by the working masses - but the central differences that will come up, sooner or later, will be around the fundamental character of the capitalist economy and the interests of the rich elite. It will be about the policies that tax wealth, that 'hit' the profits of the businesses and the multinationals, let alone nationalisations and workers' and social control.

There must be a struggle within Syriza, and from the left and workers outside it, for Syriza to adopt a bold programme that will consistently serve the interests of the working classes and the middle layers that are being crushed by the Troika policies. That, in essence, means a socialist programme.

Get organised and fight back

Fracking in trouble, from Lancashire to Lanarkshire!

Hands off our housing benefit!

Victory of the Marigold gloves

Strike called off in face of inadequate pay offer

Ongoing battle to protect pay and conditions at college

Academies victory: one down, four to go!

Rebuilding the student movement in Leicester

At least we got Labour's fish and chips!