From The Socialist newspaper, 18 February 2015 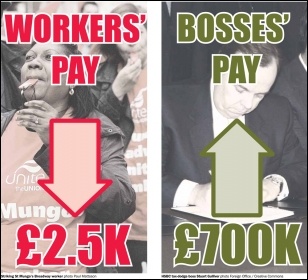 Feeling the pinch? Cutting back on spending? Wondering how you'll make it to the end of the month? You're not alone. Workers everywhere are struggling with stagnating wages and rising prices.

A recent TUC report confirmed what we're experiencing on a daily basis when it outlined that workers are £2,500 a year worse off since the start of the Con-Dem government. That's an 8.4% fall in five years!

Government attacks on working class people are absolutely unrelenting. Cameron recently pledged to cut housing benefit for 18 to 21 year olds if the Tories win the next election.

Now, in yet another slave-labour workfare scheme, he wants young people to be forced to work for their benefits after six months of unemployment. And that's on top of cutting the benefit cap by another £3,000 a year - again hitting hardest some of the most vulnerable people in society.

Who is singled out as a big winner in the report? None other than Stuart Gulliver, chief executive of HSBC, the bank implicated in a massive tax avoidance scandal. It makes Cameron's 2009 "we're all in this together" refrain seem like a really sick joke.

It's clear that it's one rule for them and another for us. The enormous pay gap graphically highlights the staggering and growing inequality under capitalism. Working people pay the price for the contradictions of a broken system.

What's the alternative? All of the establishment parties are keen to bang the drum for the super-rich, squabbling for the crown of 'most pro-business'. It is clear that, whoever wins the general election, we'll need to fight for decent pay, jobs and benefits you can live on.

The trade unions need to channel the anger that exists into a massive campaign for decent pay, including making the demand for a £10 an hour minimum wage a reality. We also need to build the Trade Unionist and Socialist Coalition (see page 5) as an important step towards a mass working class party.

Ultimately we have to fight for socialist policies to ensure that the wealth is taken out of the hands of the super-rich 1% and used to benefit the lives of the mass of people.

How the super-rich get away with it

"Vote for hope and an alternative"

"I want to tell the truth about the crime of austerity"

Fighting for a £10 minimum wage

"Driver, why are you late?"