From The Socialist newspaper, 22 February 2007

Get out of Iraq 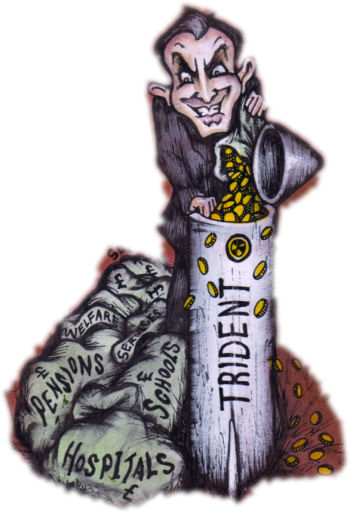 A group of Iraqi teachers visiting Britain have described how their normal life in Baghdad includes seeing 'corpses and flying body parts' as they travel to work. Teachers have been gunned down in schools, simply for teaching.

Altogether, around 3,500 Iraqi people are dying each week now in the sectarian bloodbath. This is the reality of US president Bush's 'democratisation' of Iraq.

Not surprisingly, an escalating number of people are fleeing the violence. Over two million have fled the country, mainly to Syria and Jordan, and 1.8 million are living as refugees within Iraq. This amounts to the displacement of 15% of Iraq's population, the biggest population movement in the region since hundreds of thousands of Palestinians were forced out of Palestine in 1948.

While the Iraqi people are paying by far the worst price of Bush and Blair's war, over 3,000 US and British soldiers have also lost their lives, and US and British workers are being forced to fund all this terrible devastation.

Bush is asking the US congress for extra military funding for Iraq and Afghanistan - from people's taxes - which will bring the overall US cost of the two wars to a staggering $745 billion. The planned US military budget for 2008 will be an expenditure of almost $20,000 for every second of that year!

Blair's New Labour government has spent over £6 billion of public money on the two wars, and is now planning extra spending of £76 billion on a replacement for the UK's Trident nuclear warheads.

While ordinary people suffer the effects of these vast military budgets, there are always sickeningly-rich individuals who benefit from wars. Although the oil multi-nationals have yet to make gains from Iraq's shattered oil industry, others are profiting. Of around $16.5 billion that has gone into 'reconstruction', huge amounts have been siphoned off into 'security costs' and pocketed as 'profits', bribes or been simply stolen. The US Baker-Hamilton Iraq Study Group estimated that between five and seven billion dollars has gone missing each year.

As Bush and Blair continue to refuse to end their disastrous wars and occupations, it is the urgent task of the anti-war movements in both countries to force them to do so. Just before the Iraq war, the anti-war movement in Britain held the largest demonstration ever, comprising two million people. Since then, after four years of news showing the blood-soaked effects of the war, anger against the government and opposition to the war has increased.

The 24 February Stop the War Coalition and CND national demonstration is an important event as part of the process of re-mobilising the anti-war movement. However, it is vital that the anti-war movement, together with the trade unions, discusses further concrete steps to develop a mass campaign of opposition that cannot be ignored. Support for it would be overwhelming if a determined and convincing lead is given.

Bush & Blair: Get out of Iraq

Italy: Thousands march against US military base

Living in debt - with no advice

The politics of socialism

Justice for the Shrewsbury pickets

Children at the sharp end of British capitalism

Climate change - we have to act now

CWI world congress: How will new workers' parties be built?