Link to this page: https://www.socialistparty.org.uk/articles/20834 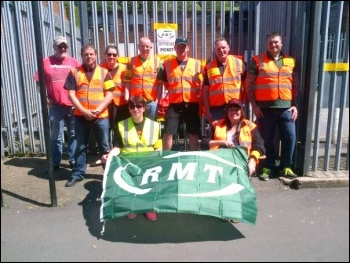 The strike by RMT transport union members was 100% solid. Further one-day strikes have been called for the next three Sundays in June.

This industrial action, including an overtime ban, is demanding the reinstatement of a guard at Cleethorpes with 10 years of clean service who was sacked for using his judgement and potentially saving a life at Grimsby station.

A kid, who already had an ASBO banning him from being near a train station, jumped up to hang on to a train as it was leaving the station.

The guard stopped the train and the kid jumped off. As the train moved away the kid jumped back on. By this time the guard judged that it would be safer for the boy to jump off than to pull the emergency stop and him to be thrown off.

The guard was sacked for not following the correct procedure, being told that if he had and the boy went under the train and died, he would still have his job!

Every conductor supported the strike because they know it could have been any one of them. The guard reported it himself or no-one would have known about it, but now any incident of risk is likely to go unreported.

The company First, that operates the TPE franchise, has taken no account of the extenuating circumstances or the guard's honesty and unblemished record, and squashed his appeal and director's review.

Asked why the company seemed to be digging its heels in over this victimisation, RMT organiser Gerry Hitchen said:

"I think our member was just in the wrong place at the wrong time.

"First are bidding for the franchise renewal and maybe they are showing that they will take the union on or preparing the way for driver-only operated trains".

RMT guards voted 34-7 to strike on a 100% ballot turnout. Pickets were out from the early hours at both Cleethorpes and Sheffield stations.

The union executive has already agreed to extend the dispute by balloting all its guard members across the franchise which covers the north of England running into Scotland.

This version of this article was first posted on the Socialist Party website on 8 June 2015 and may vary slightly from the version subsequently printed in The Socialist.