For workers' MPs on an average worker's wage 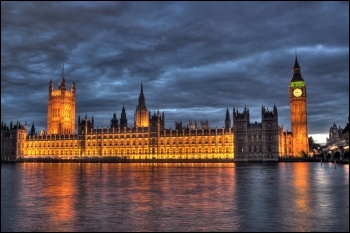 MPs are set to get a 10% pay rise, photo Peter Symonds   (Click to enlarge)

"The pay 'rise' I had this year amounts to £10 a month after deductions, which is then offset against my housing benefit and tax credits anyway," says a low-paid adult social care worker. "For MPs to be awarded massive pay rises makes me feel as if I am living in some cruel satire rather than in one of the richest nations on the planet."

Workers and their families are forced to 'debate' how to pay the bills and put food on the table while languishing on pay that's been 'frozen' for years. Meanwhile MPs and the Conservative government debate whether or not its 'appropriate' to accept a £7,000, 10% pay rise. Some reports suggest it could go up by a whopping £19,000 by 2019!

For most people this shouldn't be a debate at all. David Cameron, feeling the anger, has written to the body that sets MPs' pay to oppose it. 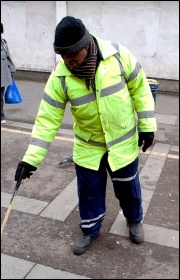 However, the Tories' true feelings have been revealed by MPs who have defended the pay rise such as Mark Field. He ridiculously called on MPs to "make a stand" to ensure the pay rise goes ahead. He then insulted the majority of the population by referring to his £67,000 a year job as "lowly paid". So much for their claim to be the party of working people!

Some MPs have claimed they would donate the rise to charity. But they happily take home the full amount at the moment and claim expenses for paperclips and biscuits!

Many also find time to take on second jobs - last year MPs declared earnings of more than £7.4 million on top of their parliamentary salaries.

This is in stark contrast to elected socialists like Kshama Sawant, a city councillor in Seattle. She fought for and won a $15 an hour minimum wage and only takes a quarter of the $120,000 she is entitled to. The rest goes to assist workers in struggle. Likewise Dave Nellist, chair of the Trade Unionist and Socialist Coalition. As an MP between 1983 and 1992 he only kept a third of his wage.

These examples show the need for working class representatives rooted in their community and the trade unions, who support workers fighting for proper pay. Join the Socialist Party to help build this alternative.