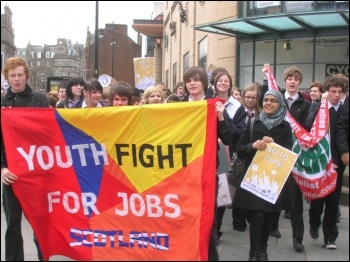 The mood of people at the rally reflected a real desire for action against austerity and a searching for the best way to fight back.

Socialist Party Scotland was prominent in George Square, calling for the trade unions to take national co-ordinated action against austerity. Our central demand for a 24-hour general strike received a fantastic response.

We also called for the Scottish government and all local councils to set 'no cuts budgets' and refuse to implement Tory cuts.

The highlights of the rally included striking Dundee hospital porters, on all-out strike for fair pay for eleven weeks. They were represented onstage by Unite senior shop stewards Ronnie Heeney and Graham Nelson. They concluded: "We need a general strike and a political voice for working class people. Victory to the porters, victory for caseworkers, victory to the working class!"

Larry Flanagan, general secretary of the largest teaching union, EIS, invoked the example of the mass non-payment campaign against the poll tax that brought down Thatcher (with the Socialist Party's predeces-sor Militant playing a leading role).

30 people applied for more information on joining Socialist Party Scotland on the day. 183 copies of the Socialist were sold and over £200 in fighting fund raised.

In addition, we distributed thousands of Socialist Party and Trade Unionist and Socialist Coalition (TUSC) leaflets.

The Scottish TUSC conference is taking place on Saturday 27 June in Glasgow at 1pm in Renfield-St Stephens Centre, Bath Street.