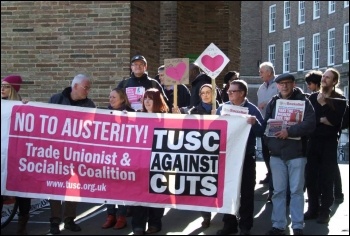 Shop stewards from Scotland's two all-out strikes, the Dundee hospital porters and the Glasgow homeless caseworkers spoke from the platform. Graham Nelson, senior Unite shop steward from the striking porters explained that he and many others had voted TUSC in the election because we need a party for the working class.

John McInally, PCS vice president and Socialist Party member, said that those who dismiss TUSC's relatively low votes should learn the lessons of how working people formed the Labour Party for political representation over 100 years ago.

Philip Stott, a Socialist Party Scotland member, on the Scottish TUSC steering committee, said that despite winning an unprecedented election victory on an anti-austerity platform, the Scottish National Party seem intent on continuing to implement cuts in Scotland.

TUSC calls on the Scottish government and councils to refuse to carry through Tory cuts by setting no cuts budgets. We will continue to seek to work with all those who agree with the need for a widespread, united 100% anti-austerity and socialist election challenge in the May 2016 elections.

"It's like the Tories decided to usurp the tale of Robin Hood, except this time the Sheriff of Nottingham is the hero! And it seems Andy Burnham agrees!" said Kevin Bennett, TUSC councillor for Warrington. He was speaking at TUSC's North-West conference on 27 June, attended by 50 activists.

RMT regional organiser Daren Ireland outlined the essential organisational steps to take including building finance through standing orders for next year's local elections and then the 2020 general election. TUSC aims to win the unions to support a new mass working-class party.

We want to build local groups, welcoming individuals and organisations operating on an open and federal basis. We intend to stand candidates in the May 2016 local elections and re-electing Kevin Bennett next year will be a priority task.

Enthusiasm for building TUSC was shown by the collection, which over £260.

Noreen Bailey, Salford & Eccles TUSC candidate and local anti-cuts campaigner, said: "TUSC members gave me a sense of worth and a glimpse of a better future."