Fight the Tories' 'Them & Us' budget 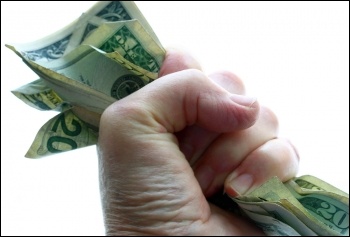 Young people face being taken out of the benefit system altogether. Charities and voluntary sector organisations point to the catastrophic consequences, estimating that two million more children will be dragged into poverty.

It's a budget for the billionaires and the millionaires, with inheritance tax being cut. Rather than taxing the wealth of property speculators who litter cities with unaffordable empty luxury flats, council house and housing association tenants who earn a reasonable wage will be hit with full market rents.

For the greedy city financiers and their political lackeys, even this banquet budget for the rich at the expense of the poor, is not enough. Osborne is being urged to remove the measly levy on the biggest banks and Tory party leadership contender Boris Johnson is lobbying for another reduction of the top rate of income tax, from 45p to 40p.

Austerity for the working and middle classes helps to finance the profits, tax breaks, bonuses and opulent lifestyles of the super-rich and the bosses. It is also to foot the bailout bill for the economic crisis which they and their capitalist system caused. Osborne's devastating austerity is being repeated by the capitalist class internationally.

In Britain we have seen the recent large and inspiring marches against the Tories' cuts agenda. But the most effective form of mobilisation of working people must be utilised - national coordinated strike action, including a 24-hour general strike.

Over 300 shop stewards and workplace reps met at the National Shop Stewards Network Conference on 4 July and voted to build a campaign for the trade unions to take this necessary strike action.

We also need a political challenge to the establishment parties that fight tooth and nail for the interests of big business and the super-rich. We need a mass, independent working class based, fighting left-wing party - a party to articulate the struggles of workers and youth, and put forward a socialist alternative to endless austerity.

The Trade Unionist and Socialist Coalition which stood hundreds of candidates in the recent council and general elections, in which the Socialist Party plays a key role, is a start in this process.