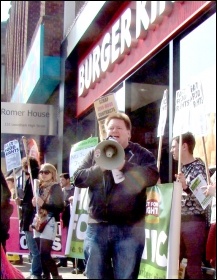 "David Cameron claims that he wants a high wage, low tax economy. If that's the case, he has a funny way of showing it. Over the last five years, he has overseen exploitation and a devaluing of labour on an industrial scale, the likes of which haven't been seen since Victorian times.

Don't just take my word for it; look at the jobs websites for proof. Zero-hour contracts, workfare, part-time roles, temporary contracts and apprenticeships offering full-time responsibilities and duties for as little as £2.60 an hour.

If this wasn't enough, Cameron's government wants to further punish those on poverty wages by cutting the benefits that they have to claim as a result of the poor pay they receive. This is all hammered home by the sneering Work and Pensions sociopath, Iain Duncan Smith; a man who has already contributed to a number of people being driven to commit suicide.

The BFAWU believes that workers shouldn't have to rely on benefits. They should be able to plan their lives without constant form filling, in order to prove that they are living in poverty. Cameron could make good on his constant spin by announcing the move from a minimum wage, to a living wage of at least £10 an hour.

This would remove the need for people to claim in-work benefits, give the economy a good shot in the arm and show him making good on his up to now laughable claims that the Conservatives are 'the party of working people'."