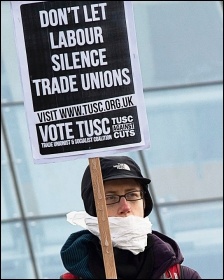 As we go to press, members of general union Unite are discussing major political changes at our four-yearly rules conference. Although the union's leadership has headed off calls to leave Labour, it was pressured to promise a new conference if the situation changes.

The union's leading body, the executive council, tried to avoid votes on a number of anti-Labour motions. To do this it produced what many members will see as a bland holding statement. This delays deciding on Labour affiliation until after the races for the party's London mayoral candidate, and its national and Scottish leaders, conclude.

A number of Socialist Party members took part in the debate to speak against the statement. But left-winger Jeremy Corbyn's leadership stand helped the executive convince conference to give Labour one more chance.

The statement passed. However, the leadership was not immune to growing pressure to leave Labour and build a new mass workers' party. This May, 196 Unite members stood in the elections for the Trade Unionist and Socialist Coalition (TUSC), which includes the Socialist Party.

Len did not give any specific criteria for this to happen. But Socialist Party members, along with many others in Unite, will be pushing for a recall conference should Jeremy lose.

Even many of those who voted in favour of the statement are questioning the Labour link. 30 attended a TUSC fringe meeting, including strikers from south London's Bromley council. Their branch secretary, Kathy Smith, addressed the meeting.