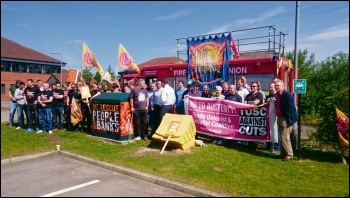 Firefighters and supporters demonstrated in Easingwold, Yorkshire on 24 June against £1.3 million cuts. The Fire Brigades Union is opposing proposed 'mixed crewing'. Instead of running fire engines with a full-time crew, bosses want to reduce crew sizes further to three plus one part-timer.

In rural Yorkshire there are big distances between full-time stations and small-town, part-time stations. This, alongside other proposals, will lead to much longer response times.

One firefighter commented: "In smaller fire brigades like North Yorkshire there's no fat to cut. Services are over-stretched now. Unfortunately, someone may have to die before those at the top see that."