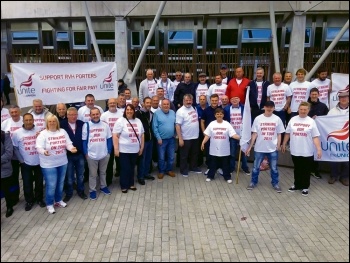 After more than three months of all-out action, 117 hospital porters in Dundee have beaten the bosses.

The members of general union Unite had been stuck at bottom-rung pay band one for over a decade. Bosses at NHS Tayside ignored multiple findings they should be in band two. So porters at the Ninewells and Royal Victoria hospitals took four months of industrial action, including 13 weeks of indefinite strike.

Workers secured regrading and immediate pay rises of 6-7%. The majority will also see year-on-year rises as they work their way to the top of band two. Unite says this will mean an overall 20% raise by 2018. The union also won £1,800 cash payments for every striker.

Finally, 14 porters on six-month contracts have been made permanent. In spite of their contracts ending in early May, 13 of the temps heroically joined the action and struck solidly throughout.

Their victory is one for resolute, militant trade unionism. NHS Tayside's chief executive exclaimed that Unite was "acting contrary to what we would consider to be the normal actions of a reasonable trade union." By this she meant fighting for members' interests, instead of sticking cosily to so-called partnership working.

The strike had a major impact on other hospital unions whose right-wing leaders back partnership. A Scottish official for public sector union Unison wrote to local branches at the start of the action, urging them to "think twice before supporting the strike".

However, this criminal advice was ignored by the majority of Unison members, who gave the porters 100% backing. Many bureaucrats were openly hoping for the defeat of a strike that threatened their modus operandi: avoid industrial action at all costs.

The strike has forged a 'new normal' for how unions should defend workers in the NHS.

Management's response was not to negotiate, but to try and tough it out with 'volunteers'. Senior managers, often band seven and above, tried to cover portering.

But it was clear from early on this was not a viable strategy when faced with a prolonged all-out strike. Regular reports emerged from Ninewells - including photographs of refuse piling up, and non-emergency procedures being cancelled - which exposed the major impact of the strike.

The strike took place in the run-up to Westminster elections, so pickets could test the mettle of competing parties. Political support came overwhelmingly from Socialist Party Scotland and other supporters of the Trade Unionist and Socialist Coalition (TUSC). Most porters duly voted TUSC.

Senior shop steward Ronnie Heeney said: "Not one Labour, SNP or any other candidate - apart from TUSC - have taken the time and effort to visit our picket lines. Why would I support someone who can't show any support for me? My X went proudly in the TUSC box."

Stewards also described the support of Socialist Party Scotland members as an "inspiration" to them, which is humbling. We would say the porters have been an inspiration to socialists and working class people in Dundee and beyond.

Graham Nelson, another senior steward, said: "If 117 men and women in Dundee can have the impact we have had, imagine what could be achieved if the entire trade union movement took action together, in a coordinated campaign of industrial action - a general strike - against austerity."