Council workers in Bromley, south London, staged their fourth wave of strikes against 90% privatisation on 7 and 8 July. General union Unite was joined by public service union Unison for the first time in the dispute.

As we go to press, members are due to join striking workers from north London's Barnet council in Parliament Square. The demonstration will take place on Tory Chancellor George Osborne's budget day. 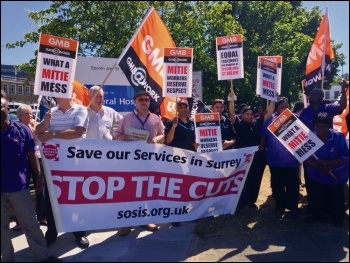 Cleaners at Epsom and St Helier hospitals in Surrey are balloting to strike over pay. The workers, outsourced to Mitie, demonstrated on 30 June.

Kieron Merrett, regional organiser for general union GMB, spoke to the Socialist. "They are paid close to the minimum wage, whereas others in exactly the same jobs are earning the NHS nationally agreed rates. What we are asking for is equality."

Probation workers organised by Unison will walk out for two hours on 14 July in an ongoing dispute over pay. The stoppage from 8 to 10am comes after previous action planned for 11 June was suspended to allow talks.