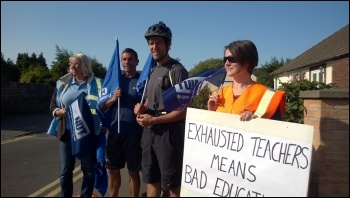 Teachers at Fitzalan High School in Cardiff struck on 9 July against new timetables. The dispute could be a test case for the council's attempts to force more from workers.

Changes would increase the number of lessons by 15%. Teachers are already exhausted.

"If my resolve ever weakens, I always think of ex-colleagues," one said. "We're not just taking action for our own sake. Conditions are so bad now that wanting to go into teaching feels more like a death wish than a vocation."

Management predictably downplayed the impact, but reports from inside tell of chaos reigning. The school stayed open despite the absence of teachers - and despite caretaking staff organised by general union GMB refusing to cross the picket line.

Discussion has also erupted among non-teaching staff. Their appetite is building for joining the action.

Support workers' union membership numbers had been weakened by what members describe as a feeble response from their union to negotiations. Some had lost almost a fifth of their salary.

But now, many are discussing re-joining - and this time holding union leaders to account.