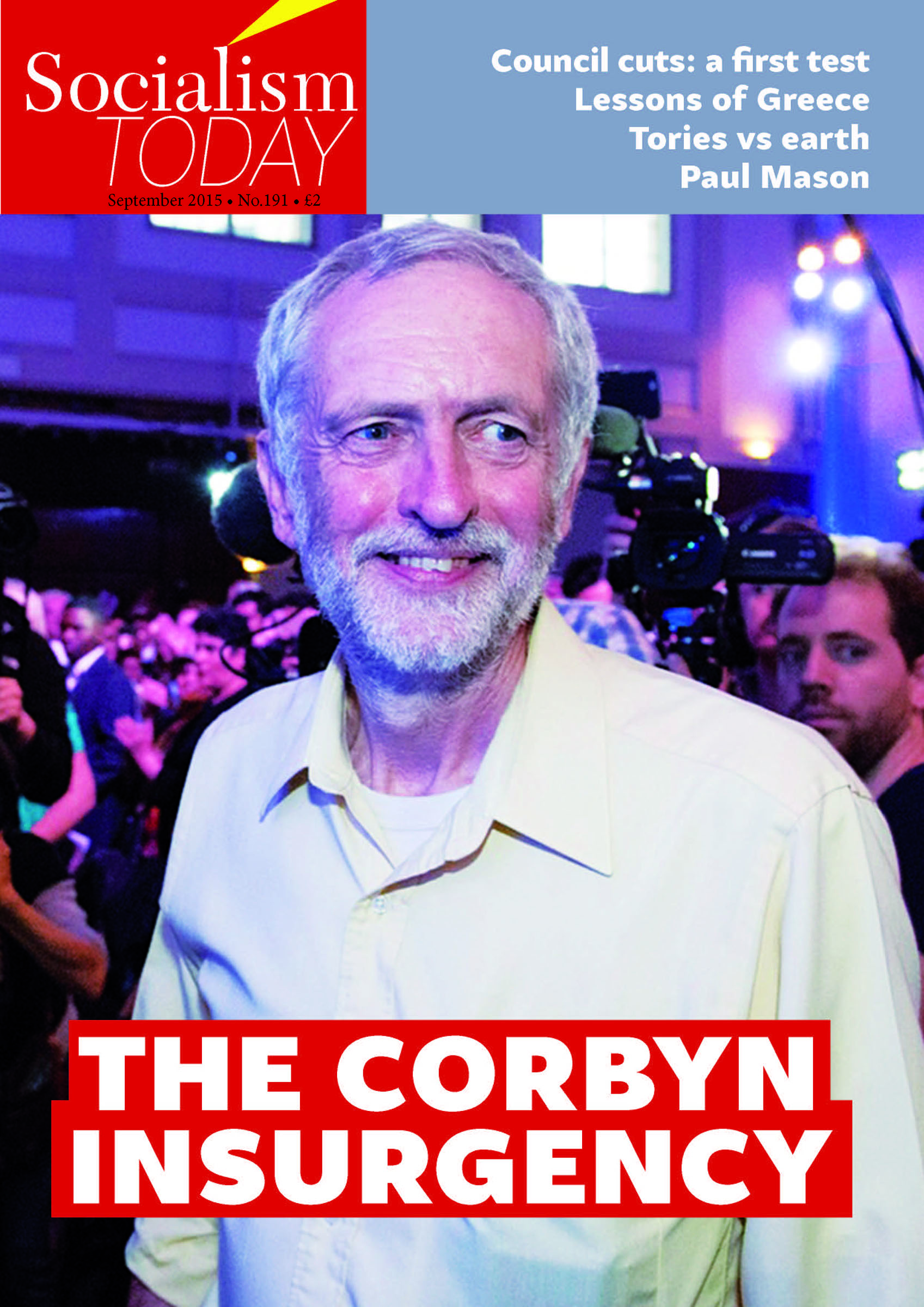 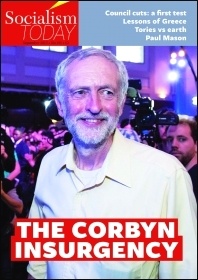 The September edition of Socialism Today goes to press three weeks before the result of the Labour Party leadership election is announced. But whatever the outcome of the contest, Jeremy Corbyn’s campaign has already transformed the political situation in Britain. Public ownership, a free education system, trade union rights, councils resisting the cuts and not implementing them, all are once again up for discussion. And although explicit references to it have been muted in the campaign, even the S-word itself – socialism – is now back in ‘mainstream’ political debate.

But does this mean that the transformation of the Labour Party into New Labour, another ‘normal’ capitalist party, has now been reversed? Michael Meacher MP, a minister in the 1974-79 Labour government and again under Blair from 1997-2003, backing the Corbyn campaign, described it as “the biggest non-revolutionary upturning of the social order in modern British politics. After 20 years of swashbuckling capitalism the people have said enough, and Labour is now finally regaining its real principles and values” (The Guardian, 13 August).

The reconstitution of Labour, however – claimed by Margaret Thatcher as her greatest achievement – was not one act but a process, taking place against the world background of the seeming triumph of capitalism after the collapse of the Stalinist states of Russia and Eastern Europe in the early 1990s.
It was both an ideological and an organisational process, rooting out socialist ideas and destroying the democratic structures of the Labour Party which had allowed the organised working class, through the trade unions in particular, to contend for influence within the party.

The Corbyn insurgency is indeed a movement against ‘swashbuckling capitalism’, but the ‘new social order’ of the last two decades that removed the element of independent working-class representation within the Labour Party will not be lightly overturned.

Tony Blair abolished Labour’s historic commitment, in Clause Four, Part 1V of the party’s rules, to “the common ownership of the means of production, distribution and exchange”, in 1995, replacing it with a paean to the dynamic “enterprise of the market and the rigor of competition”. This was not just symbolism. Clause Four summarised the collective interest of the working class in fighting for a new form of society, socialism, in opposition to the capitalist market system.

On the other hand, trade union affiliation (when democratically exercised by union members) enshrined the potential ability of the working class through the unions to control its political representatives. It was these characteristics that defined the Labour Party in the past as a ‘capitalist workers’ party’, with a leadership at the top which invariably reflected the policy of the capitalist class, but with a socialistic ideological basis to the party and a structure through which workers could move to challenge the leadership and threaten the capitalists’ interests. 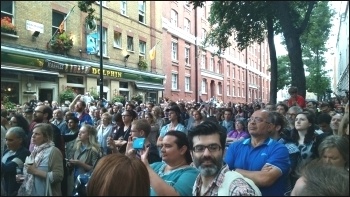 But the trade unions’ collective role was systematically erased, too, starting with the introduction in 1994 of ‘one member, one vote’ (OMOV) rules for selecting candidates. Previously, trade union branches would send delegates to constituency Labour Parties, alongside local ward party representatives, to debate, decide policy, and select candidates. This was how the Militant MPs, Dave Nellist (now chair of the Trade Unionist and Socialist Coalition – TUSC), and the late Terry Fields and Pat Wall, won their selection as Labour candidates in the 1980s.

That democratic structure – participatory, representative democracy – meant that healthy mass parties such as in Liverpool and Coventry were effectively local ‘parliaments of the labour movement’. New Labour, in contrast, rested on a largely passive membership.

Ironically, this process culminated in the introduction of the current Labour Party leadership election system – a US-style ‘primary’ contest – as one of the ‘Collins reforms’ pushed through by Ed Miliband at a two-hour special Labour Party conference in March 2014, with individual trade unionists having to sign up as ‘affiliated members’ to vote, alongside a new category of ‘registered supporters’.

Ex-MP Peter Hain now laments how this move to “broaden the franchise” has turned out (The Guardian, 12 August), with the surge of Corbynistas from outside the Labour Party signing up to vote. Yet Hain was the author of the idea, in his 2011 Refounding Labour report, after he found a party “that barely functions… activism among Labour members has diminished”. Tellingly – as Hain’s report asked “are too many local parties moribund?” – it commented that, “where once there were numerous union activists in almost all constituency parties, now they are few and far between”, and “organisational tasks previously performed by volunteers” are now done by MPs and councillors.

These qualitative changes to the character of the Labour Party will not be easily reversed, even if Jeremy Corbyn wins. He would face an open revolt – with the timing dependent on the scale of his victory – from the pro-capitalist right that dominates the Parliamentary Labour Party, Labour council groups across the country, and the Labour Party machine, which would do everything to sabotage his leadership.

That is why he would need to mobilise the maximum possible support from across the workers’ movement, with the aim even of going back to the founding structures of the Labour Party which involved separate socialist political parties coalescing with the trade unions and social movements like the women’s suffrage movement. An immediate task would be to organise a conference of all those who voted for him, plus the many trade unions – including non-affiliated unions like the RMT, PCS, POA and FBU – and political parties including those involved in TUSC, which support a fighting anti-austerity programme. What would need to be done to take on the Blairite base among local councillors is examined in an article on page 17 of Socialism Today [see footnote].

TUSC was co-founded in 2010 by Bob Crow, with the Socialist Party playing a leading role, to push forward the development of a new workers’ party that could fill the vacuum of independent working-class political representation created by the transformation of the Labour Party. Its very existence has assisted Jeremy Corbyn’s leadership bid, for example, in the decision of the national executive committee of UNITE, a Labour-affiliated union, to nominate Jeremy Corbyn rather than Andy Burnham, partly motivated to counter the growing support for TUSC members campaigning in the union for a new party.

If Jeremy Corbyn now goes on to win on 12 September – and mobilises the necessary mass campaign required to defeat the still dominant organised capitalist forces within the Labour Party – it will be a giant step towards creating a new workers’ party out of the dying embers of New Labour. The same opportunity to build a new party exists, of course, if he loses, but outside the constraints of the sterilised Labour Party structures.

The Corbyn summer insurgency has signalled the potential that exists in the new stormy period ahead to build working-class representation and the forces of socialism.

The Labour Party’s official membership figures for 2014 – released by the Electoral Commission in August – showed individual membership standing at 193,754 at the end of the year. At the end of 2009 the membership was 156,205, rising after the 2010 general election to 193,261. So, after four years as an austerity-lite opposition, Labour went into this year’s election with a virtually stagnant membership.

This has changed with the leadership contest, with the number of full Labour members, including £1 a year student-rate payers, rising to 299,755. In addition, there are 189,703 political levy payers in affiliated trade unions who have signed up (for free) for the leadership contest vote as ‘individual affiliated members’, and 121,295 others who have paid £3 to be a ‘registered supporter’.

If Jeremy Corbyn becomes the Labour leader it creates a completely new situation in British politics. But if he doesn’t win, the qualitative changes made to the character of the Labour Party in the past two decades that have blocked off the avenues for democratic participation mean that the recent membership influx is not likely to be retained. Either way, the task will be to organise the forces that have been ignited by the Corbyn campaign to fight against the pro-capitalist politicians of all parties, including at the ballot box.

The September edition of Socialism Today also includes an article on the possible impact the Corbyn campaign could have in encouraging a councillors’ revolt against the new round of cuts planned for local public services.