Link to this page: https://www.socialistparty.org.uk/articles/21365 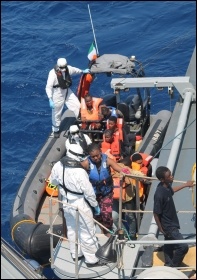 The contrast between the callous cruelty of Cameron and the support for refugees shown by ordinary people could not be starker. Hundreds of thousands, across the length and breadth of Britain, are not only signing petitions but also giving food, clothes, toys and money in order to help the refugees fleeing the world's war zones.

Understandable fears about how public services that have been cut to the bone would cope with extra people have overwhelmingly been thrust aside in the desire to help fellow human beings whose lives are at risk. The same story of human solidarity has been repeated across Europe.

Meanwhile, Cameron and his government, backed to the hilt by the right-wing press, have continued throughout the summer to try to whip up anti-migrant feeling, dismissing the desperate refugees at Calais as a 'swarm' there to 'seek a better life'.

Cameron ignored the truth: that the majority of those risking their lives to reach Europe, including those camped at Calais, are refugees fleeing conflict.

Of those who arrive first in Greece (about half of the total) more than 85% have come from Syria, Afghanistan, Iraq and Somalia. All of these are countries where Western military intervention has helped to create the nightmare situations from which people are now being forced to run.

Only the publication of the heart-rending pictures of a drowned toddler - first on social media and then in the capitalist press - has forced Cameron and the government to start crying a few crocodile tears for refugees. This is a cynical adaption to the huge wave of support for refugees since the photographs were published.

One charity which provides rescue boats in the Mediterranean reported a 15-fold increase in donations in the course of 24 hours. However, while the population's sympathy is genuine, Cameron is only trying to make up the political ground he lost over the issue. Up until the last few days the government asylum system had only allowed a tiny 216 refugees from Syria to claim asylum in Britain.

Under enormous public pressure, Cameron has now said he'd allow in up to 20,000 Syrian refugees over five years - six per constituency each year!

Moreover, he has still refused to take any refugees that are already in Europe, on the spurious grounds that this would encourage more people to risk their lives crossing the Mediterranean.

Yet the nightmare that has developed over the last few years proves beyond doubt that, so desperate is the situation in Syria, Iraq and other war-torn countries, no punitive measure will stop people risking their lives to try and reach safety.

Control of decisions whether to grant asylum cannot be left in the hands of this callous government. We demand that elected committees of ordinary working people, including representatives of migrants' organisations, have the right to review asylum cases and grant asylum. 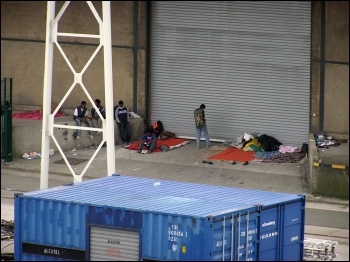 Not only the British government, but the whole of the bosses' club that is Fortress Europe, have created what they hoped were insurmountable barriers to keep refugees out of Europe.

The building of huge walls, guarded by armed soldiers, stopped people crossing into Europe by land, so they took to the sea. The capitalist politicians of Europe, including the British government, responded by cutting back the rescue boats.

The barbaric logic of the argument was that if more refugees drowned, it would convince others not to come. This unbelievable cruelty didn't work of course. Instead, the numbers drowning increased exponentially.

In April 2015, 1,308 migrants are believed to have drowned compared to 42 in the previous April when the Mare Nostrum rescue boats were still in operation.

As the photographs of the last week have driven home to millions of people, many of the dead were women, the elderly and small children.

Public pressure has forced Cameron and Co. to drop their crude anti-migrant propaganda. It would be naïve, however, to imagine that the government and the right-wing tabloids will cease trying to falsely offload responsibility for endless austerity onto refugees and migrants.

As the Tories try and justify further savage cuts to public services, there is no question that they will once again try to distract working class people from the real causes of falling living standards by 'playing the migrant card'.

However, it is not migration but austerity that is responsible for the strain on our public services. Under the previous Con-Dem government £80 billion was cut from public spending, coincidentally the same amount as the bankers have received in bonuses since the economic crisis began.

If the government is allowed to falsely lay the blame for austerity on migrants, instead of the crisis-ridden capitalist system and the bankers and billionaires who benefit from it, then the Tories will succeed in grinding our living conditions into the dirt.

There is an urgent need for a united struggle of all workers against austerity and public sector cuts. This includes demanding resources in order to meet the needs of refugees without detriment to the existing population. The trade union movement needs to urgently mobilise both in defence of the refugees and against austerity.

Yvette Cooper, one of Labour's right-wing leadership candidates, has called on councils to volunteer to take refugees and many have volunteered to do so. Yet Cooper, for all she is now doing to try and lean left to take votes from Jeremy Corbyn, has consistently supported both councils carrying out austerity and the curtailing of migrants and refugees' rights.

All Labour councils, backed up by the shadow cabinet, have loyally implemented Tory cuts for the last five years, resulting in a 37% cut in council services.

As well as banding together to take refugees, councils should also be refusing to implement any more cuts in their public services, and demanding the extra money needed to meet the needs of their populations.

It is a lie that there are no resources available. British governments have spent vast sums on going to war. The costs of renewing Trident are estimated at up to £130 billion. The wars and occupations in Iraq and Afghanistan have cost £30 billion, £1,000 for every taxpayer in Britain.

But while vast sums can be found for war, there are barely pennies for asylum seekers fleeing the consequences of those wars. Now, to pay for the Syrian refugees, Tory Chancellor George Osborne will raid the International Development Fund coffers - in other words 'robbing Peter to pay for Paul'.

The money to help refugees is not only an issue in Britain, but internationally. Most of the refugees are fleeing from the Middle East but not one EU government has demanded that the hugely rich feudal elites ruling most Middle East countries use their immense wealth to help the refugees.

It was left to Abdullah Kurdi, the bereaved father of the drowned Syrian toddlers, to point out that many regimes of the Middle East are doing nothing to help, not even recognising the right to asylum in their countries.

Vast sums owned by these billionaire elites are salted away in Britain and other European countries.

Meanwhile the military forces of the UAE and Saudi Arabia regimes continue to bomb civilian areas in neighbouring Yemen in order to pursue their sectarian geo-political ambitions - bringing death, destruction and refugees on a huge scale.

The Middle East elites' wealth in Europe should be seized to pay for looking after the refugees from their regimes and wars, which Western imperialism also bears heavy responsibility for.

The only way to permanently end the refugee crisis is to fight for a democratic socialist world. On the basis of capitalism, there will always be people forced to flee their country, not by choice, but out of desperation as a result of war, environmental catastrophe and starvation.

A socialist society would harness the wealth, science and technique created by capitalism in order to meet the needs of the majority worldwide. Only on that basis would it be possible to have a world where people are free to move if they wish to, but are not forced to do so by the nightmare conditions they face at home.

This version of this article was first posted on the Socialist Party website on 8 September 2015 and may vary slightly from the version subsequently printed in The Socialist.