From The Socialist newspaper, 30 September 2015

Editorial of the Socialist, issue 872 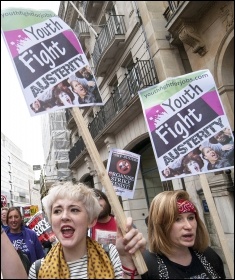 On 4 October thousands of people will throng through the streets of Manchester to demonstrate against a vicious government of the rich. As the huge popularity of Jeremy Corbyn's Labour leadership campaign has demonstrated, big numbers of people want an alternative to endless austerity.

The Socialist Party is confident that a massive anti-austerity movement can be built which would be capable of bringing this government down before the planned general election in 2020.

For many, the necessity of mounting a fight on that scale is a matter of life and death. Thousands have died following cruel sanctions and cuts to benefits. A housing crisis is driving working class people out of their homes. The NHS is being pushed towards catastrophe.

Meanwhile the rich are literally laughing all the way to the bank. The richest 1,000 families control a total of £547 billion, an amount which has more than doubled since 2009. They now own more than the poorest 40% of British households. Bankers have had the same amount in bonuses as the rest of us have faced in austerity.

In order to safeguard this shift of wealth from working class people to the super-rich, the Tories plan to drive through even more savage attacks on trade union rights.

Despite this juggernaut, the Tories are not all-powerful. Only 24% of the electorate voted for Cameron's party - the smallest vote ever of any Tory government.

The 'Corbyn surge' is an indication of the potential to build a massive movement. The enthusiasm for Jeremy Corbyn goes way beyond the thousands who have attended meetings and joined the Labour Party, and even beyond all those who registered to vote for him. Young people at freshers fairs rush up to Socialist Students stalls declaring "I love Jeremy!" 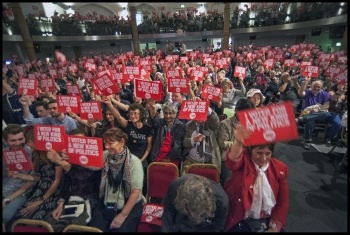 Building a mass movement requires harnessing all that energy and optimism, and arming it with organisation and ideas. It will involve people in their communities standing together to defend their homes against social cleansing, or marching to save their local library. It will involve young people - students occupying to save courses and young workers organising against poverty pay and zero-hour contracts. It will involve mobilising the swell of human sympathy for refugees.

At the heart of the struggle must be the trade unions. There is a swirling of excitement among a fresh layer of people who have started to go on demonstrations, such as the End Austerity Now demo in June and the Refugees Welcome Here demo in September, and who are enthused by Jeremy Corbyn, but who do not at this stage have a clear idea of working class methods and organisation. Many will not have an understanding of the potential power of the working class organised in trade unions.

The right-wing trade union leaders bear an enormous responsibility for this. On 26 March 2011 750,000 people marched through London against austerity under the leadership of the Trades Union Congress (TUC). In November 2011 two million took part in a public sector general strike. But this momentum, this testing out of their latent power, was squandered by right-wing union leaders who capitulated to the government and signed off on the struggle over pensions. 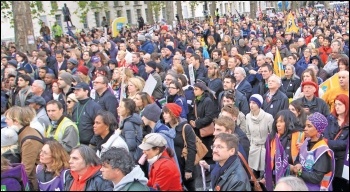 It is hardly surprising that so many people now enthused and wanting to fight do not automatically think that the trade unions have an important role to play. But building the pressure on the trade union leaders, especially to 'Kill the Bill' (the bill stepping up the anti-trade union laws), is an essential part of creating a mass movement with power enough to bring down the government.

The trade unions organise six million people. They are all part of families and communities. When they act, they can inspire and lead millions more who are currently unorganised. Trade union action can bring society to a standstill - this enormous power can change everything, hitting capitalism where it hurts.

It is essential that we continue to fight for coordinated strike action, as the National Shop Stewards Network (NSSN) has consistently done since 2010. For example, it was the combined struggle of the NSSN with socialists and fighters in the more militant trade unions, PCS, RMT and POA in particular, that forced the TUC to agree to discuss a general strike in 2012. 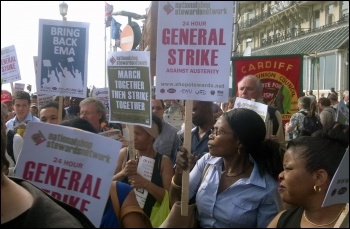 This momentum must not be betrayed like before. But now, after five years of breath-taking austerity with worse to come, and with political revolt expressed through Corbyn's campaign, it will be much harder for the leaders to backtrack. A big protest at parliament when the third reading of the Trade Union Bill takes place on 2 November is the next step. This must be followed up by generalised action if any union is threatened.

A key battleground in the coming months will be local government, which, already reeling after a 37% funding cut, faces cuts of a further £20 billion. Scandalously, Labour councils up and down the country have spent the last five years crying crocodile tears as they passed on devastating Tory cuts, claiming that they had no choice. They are now preparing more savage budgets on top of those already forced through.

But as the Trade Unionist and Socialist Coalition (TUSC - see pages 12 and 13) conference last weekend made clear, Corbyn's victory now means there is no excuse left. The Observer distorted our position when it said "some left wing groups are calling for Labour to refuse to set budgets". As TUSC chair Dave Nellist explained in reply:

"In the last couple of years we have worked with councillors in Southampton, Hull and Leicester to present legally-compliant no-cuts budgets to their councils. Based on the use of reserves and borrowing powers, those budgets were designed to buy time for councils to organise a broad public campaign for the restoration of their funding."

We think that potentially very many more councillors could now be emboldened to make this stand. Such a revolt could spearhead a national fightback. But where councillors insist on cuts, TUSC is ready to electorally challenge. 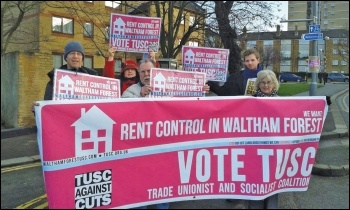 The Socialist Party will do all we can to reach out to all those people joining Labour, to help them fight the war being waged against Corbyn by the majority of the parliamentary Labour Party, councillors and party machine. It is necessary to demand the restoration of democracy in the party and the mandatory re-selection of MPs.

Out of this fluid process is the makings of a new working class political voice, whether that be from the Labour Party if the pro-austerity, pro-market right wing are defeated, or in a new formation outside.

It is urgent that all the Corbynistas, the trade unions that supported Corbyn, and the thousands of socialists and fighters outside the Labour Party, are brought together now to organise that fight.

An essential element to building that movement and alternative to the Tories is a political programme - Corbyn's programme and beyond. The utter inability of capitalism to provide a decent life for the majority, and instead to force the working class to pay for a crisis we did not cause, is leading to a searching for something better. The experience of Syriza in power in Greece, however, shows that it is not enough to declare an anti-austerity position, without the programme to see it through.

Austerity is not an accident, it is the policy of crisis-ridden capitalism, a system based on the profits of the few extracted through the exploitation of the majority. To combat it, it is necessary to challenge the system head-on: democratically nationalise the banks and the top companies in order to plan the use of that vast wealth for the benefit of the billions, not the billionaires.

People will test ideas and test again, but will come to realise that they need anti-austerity in deeds as well as words, that they need independent working class organisation, and a socialist alternative.

Give us the resources to defeat the Tories