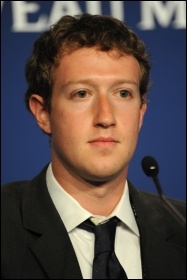 A couple on average wages would have paid more UK tax than corporate giant Facebook in 2014.

Facebook declared itself to be working at a loss in Britain, despite making £105 million from UK operations last year.

The firm hid profit by moving takings from the UK to Ireland and the Caymen Islands, and paying out huge bonuses to its 362 UK employees. This allowed it to slash its UK tax bill and pay a meagre few thousand - from massive global profits of £1.9 billion.

Public service union PCS estimates £120 billion is lost through tax avoidance and evasion by big business every year. This money could be used to fund our ailing NHS, build much-needed quality social housing, and provide a well-funded social safety net.

Ordinary people continue to pay for the banking crisis with vicious cuts to welfare and working tax credits. But corporation tax has steadily dropped - from 28% to 21% since George Osborne took over the treasury in 2010.

The Socialist Party says: nationalise the parasitic corporations that dominate our economy under the democratic control of workers and the public. Then we could plan production and service to cater to the needs of ordinary people, not the profits of the wealthiest 1%.