TV review: We Want Our Country Back 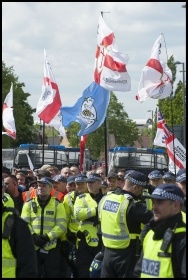 Tiny far-right group 'Britain First' has attracted disproportionate levels of media coverage over the last year. The BBC is latest to jump on the bandwagon. Its documentary is provocatively titled 'We Want Our Country Back'.

Cuts, unemployment and deprivation - coupled with the racist rhetoric of establishment politicians - are the fertile soil far-right ideas lay root in. They play on workers' genuine fears about jobs and services, but try to scapegoat minority groups instead of fighting back against cuts politicians and greedy bosses.

The BBC does not address these issues.

The film follows the group embarking on its activities. They engineer a confrontation with local Muslim youth in Luton. They pose with offensive slogans outside mosques. And they try to intimidate Muslim businesses with absurd claims that halal food funds terrorism.

Britain First produces these stunts to provide 'clickbait' - sensational material designed to capture online traffic - for its Facebook page. The media marvel at their success in building an online presence. But they are partly responsible with the coverage they provide.

Britain First, and other miniscule far-right groups, receive far more mainstream media coverage than the Socialist Party. This is despite the Socialist Party being a much larger organisation with many elected representatives, especially in trade unions.

The real strength of Britain First is shown by the turnout they achieve on demonstrations - around 200 for a 'national mobilisation'. This documentary tries to portray the group as a mass movement, or at least the embryo of one. But it is a phantom movement; nothing but a micro-sect with a military fetish.

Violence is a constant theme. The vicious, anti-worker character of Britain First is exposed as they try to intimidate striking taxi drivers.

Despite the incessant racist bile of the gutter press and establishment politicians, there is no public yearning for a far-right mass movement. An anti-austerity mass movement, on the other hand, would be extremely popular - as support for Jeremy Corbyn shows.