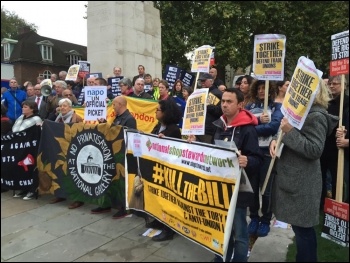 The new shadow chancellor, John McDonnell, promised Labour's support for trade union action to defeat the bill. As Matt Wrack pointed out from the platform, this is a welcome change from the New Labour government which maintained all the Tories' anti-union laws.

Green MP Caroline Lucas also spoke against the bill, but unfortunately the Greens included in their 2010 manifesto a pledge to ban trade unions from donating to political parties, which is one of the restrictions of this hated bill. Also, in Brighton, as part of a so-called equal-pay deal, the council attempted to cut the pay of the city's low-waged bin workers by as much as £4,000, ripping up a union agreement.

National Shop Stewards Network (NSSN) chair Rob Williams explained how Tory anti-union laws were defeated in the past. For example, the call for a general strike developed from below when the Pentonville dockers were jailed, leaving the law impotent.

As the next step, the TUC's lobby of parliament on 2 November, which is supported by the NSSN, should become a mass demonstration. That has to be followed up by generalised strike action. This is an attempt by the government to break the back of the workers' movement so they can impose austerity forever.

We won't let them, so let's all strike together and smash this government of the billionaires.