Fighting the cuts in Camden

CAMDEN SOCIALIST Party has held a public meeting just a week after the storming of the town hall (see the socialist 477). Community campaigners, trade unionists, student activists and socialists discussed how to fight £40 million cuts that the Tory/Lib-Dem council want to put through over the next three years. 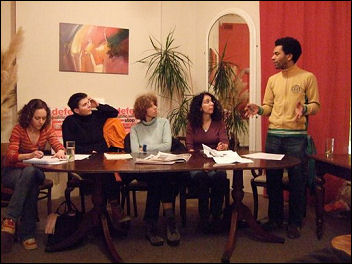 Charges are set to rise for meals on wheels, there will be cuts and closures of youth and play services, adult social services and homeless hostels and over 300 jobs are threatened.

There was a great feeling in the meeting of like-minded people coming together from different campaigning backgrounds and working to find the best strategy to win. Sian and Hannah, from Save Kilburn Grange Play Centre campaign, spoke about the campaign to save their long-running play centre from closure.

Councillors have made empty promises to them and lied about alternative places for children who currently attend the Play Centre.

Didi from the threatened Winvisible service talked of how public service cuts hit disabled people and of the double effect on women with disabilities, who still bear the primary responsibility for the care of children and elderly people in the family. 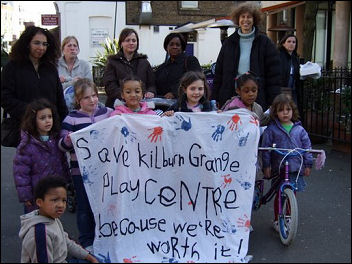 The meeting discussed ideas for boosting the campaign by reaching more people affected by these cuts who would fight to defeat the attacks on local jobs and services.

We also talked about the need for a broad campaign for better public services, involving trade unionists and community campaigners. A local Fire Brigades Union (FBU) representative spoke about the need for a campaign against privatisation that could bring people from different unions together.

The meeting wanted a strategy to beat the council and all agreed that unity was key. UNISON publicity officer and convener for education, Hugo Pierre, spoke (in a personal capacity) about the role of Camden council's workforce and UNISON members in defeating the council's outrageous plans.

Campaigners, trade union reps and Socialist Party members plan to meet again before the next UNISON steering committee to take these ideas to the meeting for further discussion with other campaigners.

£billions for rich... Pennies for us!

Fighting the cuts in Camden

Build the campaign to defeat fees