Link to this page: https://www.socialistparty.org.uk/articles/21628

Editorial of the Socialist, issue 876 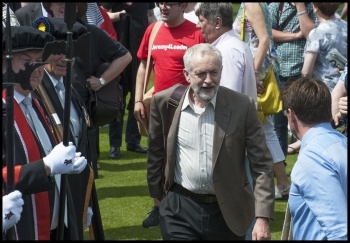 The launch of Momentum is an attempt to give a political and organisational framework to Jeremy Corbyn's agenda for change.

Will it succeed? Only if it fully embraces all the anti-austerity forces, is open, democratic, accountable and reflects the urgent need to combat, not just in words but in deeds too, the government's vicious austerity programme.

This means mobilising for real and lasting change: in the Labour Party at all levels, in the workplaces and factories, pressurising councils not to implement cuts, through the trade unions, etc, as a precondition for changing society.

The Momentum leadership seemed to recognise this when they declared that the basis of their movement must come from "outside as well as inside the Labour Party".

However, clearly under pressure from the Labour right and their press, they have recently suggested that they now wish to narrow down the base of Momentum to just the Labour Party itself and with the prime aim of a Labour government in 2020.

If they exclude real fighters against austerity with experience on the ground - particularly Socialist Party supporters and others - they will weaken the ability of Corbyn and his forces to defeat the right. They will not succeed in fully harnessing the huge pro-Corbyn anti-austerity mood outside, which is not yet a real organised movement.

There is a real battle taking place, certainly on the part of the right who wish to contain and nullify the anti-austerity movement, and remain unreconciled to Corbyn's victory. Moreover, the leaders of Momentum can, perhaps unconsciously, assist them by pursuing a political charm offensive, proposing in effect 'peaceful coexistence' with the Labour right while the latter are preparing for all-out war.

There are also many seasoned trade unionists and fighters, workers and youth who, while supporting Corbyn in general, are at the same time in favour of the widest possible unity of left forces. Notwithstanding Corbyn's victory, they are still highly suspicious that his aims can be effectively implemented through a party still dominated by the unreconstructed right.

The Socialist Party shares their views, given the ceaseless attacks on Corbyn and his supporters. Even some Labour MPs who may claim not to stand on the right but the 'centre' have joined in the anti-Corbyn campaign, and in the process revealed their real political position.

For instance, in the Observer Labour MP John Cruddas, a former Labour 'policy chief', announced the creation of a new grouping 'Labour Together'. He states that the Labour Party "has got us into a situation in which a Tory chancellor looks more in tune with our Labour councils in the North than the Labour Party itself". The only interpretation that can be put on these words is that 'Labour councils' in the North - and elsewhere - are fully "in tune" with Osborne because they are passing on his cuts.

Jeremy Corbyn won the Labour leadership contest because he articulated opposition to this and urged "Labour councils to stand together against the cuts". This can only mean: don't implement these cuts, which will only add to the already unbearable suffering of working class people.

The Socialist Party and the Trade Unionist and Socialist Coalition (TUSC) fundamentally disagree with this approach of Cruddas and most Labour MPs. We demand no-cuts, needs budgets along the lines of the Liverpool councillors in the 1980s.

Many workers would not agree to join and throw all their energies into the Labour Party while the changes that Corbyn articulated during his campaign have not been carried through. Nor would it be correct to hand over the precious funds of the trade union movement, through the affiliation of non-affiliated unions, before fundamental structural change has occurred. Corbyn could be overthrown in a coup by the Parliamentary Labour Party, in which his base is still extremely narrow.

The right are still in in control of the Labour machine and will not hesitate to frustrate, delay and sabotage to prevent workers and young people joining to change the Labour Party.

They will not hesitate to expel those on the left - as they effectively did during the leadership campaign - those who come into collision with them, while they are imposing cuts on working people. Let us remember the expulsions in the past, for the 'crime' of opposing attacks on living standards of workers through the poll tax and the cuts: in Liverpool, the Militant Editorial Board, as well as others on the left.

Unfortunately, the retreats undertaken so far by Jeremy Corbyn have encouraged rather than dissuaded the right from attacking him and his supporters. There have already been too many retreats by Corbyn: on tuition fees, on Europe - when Hillary Benn threatened to resign from the shadow cabinet, thereby forcing a retreat. There was also the flip-flop on Osborne's deficit charter, which was intended by Osborne to commit Labour to endless austerity.

This was followed by another potentially crippling blow to the 'new politics', when Corbyn declared emphatically that he was "crystal clear" in his opposition to the reintroduction of 'mandatory reselection' of Labour MPs. Right-wing Labour MPs up to now have been a law unto to themselves - ignoring the growing opposition and anger of trade unionists, in particular, to their policies. They overwhelmingly supported Blair on Iraq, also voting for PFI and privatisation.

There has consequently been a hunger, both within and outside of the Labour Party, for real accountability, a desire to see socialist fighters as workers' representatives in Parliament. The models for this are those left Labour MPs in the past, like Dave Nellist, Pat Wall and Terry Fields - who went to jail for refusing to pay the poll tax - who stood on a worker's wage and fought to the end for the interests of the working class.

The bulk of Labour MPs under Blair, Brown and Miliband were apologists for capitalism, big business - and still are - supporting its demand for greater concessions while compounding the impoverishment of huge swathes of the working class.

They have made their position very clear. Frank Field, inveterate right-wing Labour MP, openly boasted on television at the weekend that if Labour MPs are replaced in a reselection battle and then decide to stand against the Labour Party, he will support them against the official Labour candidate.

If such a statement had been made by the left in the past, this would have led automatically to expulsions. There have been no calls for Frank Field's expulsion. Yet the Labour right are already demanding that anybody who stood against Labour in past general elections should be excluded from membership.

The granddaughter of the late Tony Benn, Emily Benn, from the Labour right, has also called for the expulsion of Andrew Fisher, Corbyn's new Head of Policy, because of a few facetious remarks.

Peter Mandelson, Blair's infamous arch spin doctor - who is "intensely relaxed" about the rich - opposes Seamus Milne as Corbyn's press officer on the grounds of his "unsuitability". A child can see that this all adds up to a well-orchestrated right-wing conspiracy, taking in the majority of Labour MPs, in concert with the press, TV commentators, etc, to denigrate Corbyn and John McDonnell and prepare the ground for striking them down when they judge the time is ripe.

The strategy from the Momentum leaders to counter this is to subordinate everything to the election of a Corbyn-led government in 2020. This in turn means the left supporting right-wing figures, like Sadiq Khan for London mayor, even though he considers the best way to get elected is to systematically attack Jeremy Corbyn and the left.

This attempt to mollify the right will not succeed but it can help to demoralise and thereby disintegrate the forces that have begun to rally behind Corbyn and McDonnell. This would represent the loss of another favourable opportunity to change the labour movement in the battle against capitalism and its political representatives, the Tories and other forces that base themselves on outmoded capitalism. The political and organisational direction of the pro-Corbyn forces must be urgently discussed at all levels of the workers' movement.

This version of this article was first posted on the Socialist Party website on 27 October 2015 and may vary slightly from the version subsequently printed in The Socialist.