Link to this page: https://www.socialistparty.org.uk/articles/21668 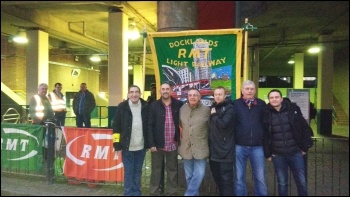 Determined DLR strikers to "fight all the way"

The Docklands Light Railway in London has been shut down for 48 hours on 3 and 4 November as over 300 workers take strike action. At the heart of the dispute is the abuse of the use of agency staff by DLR operator Keolis Amey. RMT members' terms and conditions have been undermined by casualisation, there have been breaches of agreements and a creeping culture of bullying and intimidation of staff being allowed to develop.

Socialist Party members attended picket lines at both DLR depots, brought solidarity and spoke to those on strike. 'It's all about cost cutting and this is just the start', said pickets at the Poplar depot.

"Any more than eight days sick, you get a warning. A heart attack or a toothache are treated the same", explained one worker.

This was reiterated by those on the picket line at the largest DLR depot in Beckton. One worker said: "There are members who have been assaulted on the job but have faced disciplinary action for taking time off." One RMT member is on a final written warning for taking time off after an assault. 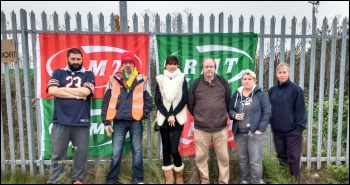 Strikers at both depots made the point that under previous contractor Serco, there was only one dispute in five years. Keolis Amey have only been operating the DLR for ten months, yet this is the third dispute in that time and was voted for by massive majorities for both strike action and action 'short of a strike'. Over 92% voted to strike with an even larger majority for action short of a strike.

Not a single train had left either depot by mid morning on 3 November - the strike was rock solid.

RMT general secretary Mick Cash said: "Pickets have been out in force and it's now time for Keolis Amey to recognise the sheer strength of feeling on the shop floor and to get round the table for meaningful talks that address the raft of serious issues at the heart of this dispute. The disruption caused by the shutdown of DLR this morning is entirely down to the intransigence of management."

The workers themselves concluded, as one of them put it: "This is going to be a protracted dispute, but we will fight it all the way."

This version of this article was first posted on the Socialist Party website on 3 November 2015 and may vary slightly from the version subsequently printed in The Socialist.