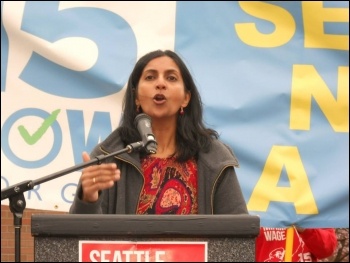 This unwavering focus on key issues that affect ordinary people secured her re-election with 55.5% of the vote.

With no big business backers, her campaign was funded by small donations from the public totalling nearly $500,000, with a median donation of just $50 (£33). This stood in stark contrast to her Democratic Party rival whose campaign was backed by slum landlords, business moguls and even Republican donors.

Support for Kshama was galvanised by the success of her first year in office. Just six months after her election in 2013, Kshama and a mass movement of working class people pushed Seattle City Council to pass an historic $15 an hour minimum wage throughout the city. This measure is expected to pull some 100,000 low-paid workers out of poverty and add $2.5 billion to their pay packets over the next ten years.

On the council, Kshama refused to accept budgets that cut or underfunded vital public services. Instead she demanded a 'people's budget' that prioritised working class needs.

This same strategy was used by Militant-supporting socialist councillors in the 1980s who proposed 'needs budgets' in opposition to Margaret Thatcher's swingeing cuts. And this tactic, applied to councils across the UK, will be vital if Jeremy Corbyn's Labour Party is to succeed in opposing Tory austerity.

The victory of Sawant and Socialist Alternative (co-thinkers of the Socialist Party) in Seattle shows that these tactics can win. An unwavering socialist programme focused on the needs of the working class can politicise young workers, energise volunteers and voters, and spark mass movements that can win real victories for ordinary people.