The final paragraph said: "As socialists, we say no to expensive and risky nuclear! We call for the nationalisation of the big energy companies, and for a national energy plan, including a programme of public investment in low-carbon energy production - solar, wind, tidal, geothermal and biomass..."

A reader criticised the idea of using biomass energy production which we publish below, along with a reply from Kate Jones. 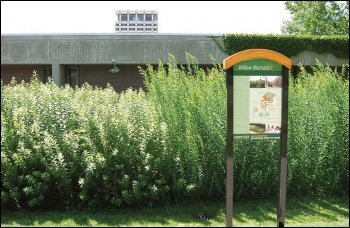 Thank you for continuing to expose the cons that are being perpetrated on the people of this country and beyond.

Unfortunately you appear to have been conned, by repeating the claim (the Socialist 876) that biomass incineration is low-carbon.

This is the same claim made by the UK government. The opposite is true and evidenced in the case of Drax power station and the Derbyshire biomass incineration plant, among others.

Using Department of Energy and Climate Change's own recently published biomass carbon calculator, it can be shown that a significant proportion of wood that Drax burns results in up to three times more carbon emissions than the equivalent generation from burning coal (see http://www.biofuelwatch.org.uk/axedrax-campaign/#2 ).

In Derbyshire, in the ninth most polluted and deprived ward of Osmaston in Derby (according to the Environment Agency) a polluting, high-carbon biomass plant is being built, which will create over 4.3 million tonnes of carbon dioxide over its 20 year lifespan. This is admitted by the developers themselves - Energos.

This plant will also cause breaches of nitrogen dioxide limits, which in the city of Derby is the cause of two Air Quality Management Areas being designated, in which people are breathing substandard air (evidence on http://www.foe.co.uk/groups/derby/news ).

A question has been raised about the status of biomass as a low-carbon, renewable fuel. As one of the authors of the article on nuclear power and the alternatives, I welcome this contribution to the debate.

Yes, biomass as used in power stations like Drax is no doubt a polluting fuel, but I believe it does have a place in a low-carbon energy 'mix' as part of a socialist plan for energy.

As the report Zero Carbon Britain (Centre for Alternate Technology, 2013) points out, biomass provides storable energy which can be used to create biogas and synthetic liquid biofuels, or for direct heating for buildings rather than being burnt to generate electricity.

Plants take in carbon dioxide from the air as they grow, which is emitted when they are burnt, making their use as fuels in effect carbon neutral. The use of otherwise edible crops, or of land suitable for food production, to produce biomass is unlikely to be part of a democratic socialist plan for energy.

However, the planting of trees for short rotation coppicing, on land unsuitable or impractical for food production, could produce a regular supply of fuel (while at the same time playing a role in flood prevention).

Other sources of biomass are the woody waste from food crops or timber production, or fast growing grasses such as miscanthus.

Rather than the criterion being profitability, as now, a socialist plan for energy would look at the specific impact on communities and the wider environment of any possible energy sources being proposed.