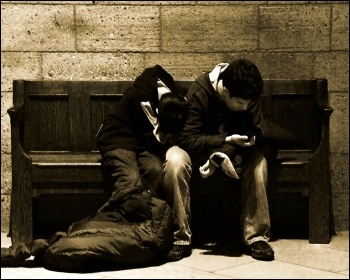 Young woman and man wait on a bench with a sleeping bag at night, photo by Tony Fischer (Creative Commons)   (Click to enlarge)

The news broke last week that people were queuing overnight to buy studio flats in far-west London for £200,000.

Very few Londoners will have blinked an eye. Because this grim scenario is becoming the norm.

London's house prices are rocketing. Anyone trying to do the impossible - get affordable housing in the capital - is thrown into a bear pit to fight it out for the few remaining scraps.

Those supposedly lucky enough to make it through the doors and have a chance at one of the 228 flats will have to put down a £2,000 deposit. Then they must pay 20% of the value within ten months. All for homes not set to be completed until 2017.

The grotesque London property market never misses the chance to make a quick buck. This meant the majority queuing were in fact bloated property investors. A few desperate, young first-time buyers were peppered around them.

Take the wealth off the 1% super-rich bosses and landlords - and end the living nightmare of our housing crisis.