Link to this page: https://www.socialistparty.org.uk/articles/21751

Only workers' unity can end terrorism, division and war 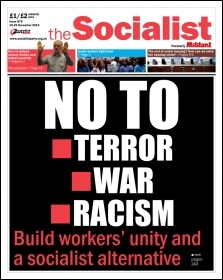 The Socialist issue 869 front page: No to terror, war, racism - build workers' unity and a socialist alternative   (Click to enlarge)

The atrocities committed by Isis in Paris on Friday 13 November were one of the worst attacks in France since World War Two. While the attacks ten months ago on Charlie Hebdo and a Kosher supermarket were met with much shock and outrage, these latest deplorable killings have stunned and appalled people anew because of their greater death toll and more indiscriminate nature. Young people out enjoying themselves on a Friday night were particularly hit.

This was the fourth terrorist attack linked to Isis in just two weeks, following the loss of 224 lives on a Russian aeroplane and suicide bomb attacks in Beirut and Baghdad, which together killed 61 people.

Isis is willing to target any country or community that opposes its existence and growth, including other Muslims. But following these recent attacks on French and Russian people it said they were targeted because both those countries have begun air strikes on Isis in Syria. So in these cases ordinary people have been indiscriminately slaughtered for the crimes of their governments, who are acting only in the interests of the ruling classes.

French president Francois Hollande responded to the Paris attack by declaring a state of emergency and ordering another, wider bombing onslaught on the Isis-held town of Raqqa in Syria, carried out with the US. Their high-tech missiles - inflicting mass terror, death and injury on civilians and Isis personnel alike - will do nothing to prevent further terrorist attacks in the west.

It was GW Bush's military response to 9/11 - his so-called "war on terror" - that led to today's catastrophic situation in Afghanistan and Iraq, laying the basis for the conflicts within which Isis has arisen in Iraq and Syria.

When faced with a popular mass revolt against his dictatorship in 2011, Syrian president Assad stoked up sectarian tensions in order to 'divide and rule'. While opposing Assad, western powers were also alarmed by the 'Arab revolutions' that threatened their client regimes. In league with their reactionary Gulf State allies, they funded and armed jihadist opposition to Assad. This helped Isis to grow, through exploiting sectarian division and the plight of the Sunni populations in Syria and Iraq - to now control an area the size of Britain.

Ongoing bombings by western imperialist powers (and Assad's forces) lead to more recruits for the likes of Isis, as film and photos of children torn apart by the missiles circulate in the Middle East and worldwide. Yet the sickening narrative of many capitalist politicians and media commentators - including this week even the usually astute journalist Patrick Cockburn - is that Isis will only be defeated by more military bombardment.

Among them is David Cameron, who has for a long while wanted to extend British bombing of Isis in Iraq to include its territory in Syria. His hand is being stayed by divisions over strategy within the ruling class and his humiliating parliamentary defeat in 2013, when he was prevented from bombing Assad's forces. However, he authorised assassination by drone in September of two British jihadists in Syria and now the Paris attacks could be used to try to whip up support for further incursions.

Jeremy Corbyn, on the other hand, has argued against bombing Syria, correctly saying it would bring more "mayhem" and that it's necessary to ask questions about what is fuelling the conflict, such as: "Who is arming Isis, who is providing safe havens for Isis? To get there you have to ask questions about the arms everyone's sold in the region".

The perpetrators of the Paris attacks included 'home grown' French and Belgium jihadists. As FT writer David Gardner pointed out: "Even if the vast majority of Sunni Muslims are hostile to Isis, the jihadis still have two big pools of potential recruits: despairing refugees on Syria's borders and disaffected Muslims in Europe."

France has the largest Muslim population in western Europe and has had the largest exodus (over 1,500) from a European country to join Isis. Concentrated in large housing estates in city suburbs, French Muslim youth suffer from racial discrimination, many feel alienated and up to 40% are jobless. In Belgium they also have a high unemployment rate - and in Britain.

It is the inequality, racism, wars and lack of opportunity in the capitalist system that lies behind right-wing Islamic 'radicalisation'. France's Centre for the Prevention of Sectarian Drift Related to Islam (CPDSI) estimated that 80% of French citizens who have 'radical Islamist' beliefs have come from non-religious families.

In Europe Isis feeds on legitimate grievances and anger, of young Muslims especially. It aims to divide communities through preaching religious absolutism and using terror, in order to boost its support base and overall fortunes. The more its attacks lead right and far-right politicians to scapegoat all Muslims and refugees, the more successful it regards itself at sowing dissatisfaction in the Muslim population.

It isn't possible for the imperialist powers to completely destroy Isis militarily. In any case, weakening it through military blows won't stop new jihadist groups and sectarian organisations from arising - as is happening globally anyway.

Defeating Isis can only be done by the working class and rural poor in Iraq and Syria, who need to build a united, non-sectarian struggle against all the local reactionary forces - all forms of oppression - as well as those further afield.

Neither will terrorist acts be prevented by governments increasing 'security' measures and surveillance - the potential channels and targets are far too numerous. Measures like the 'snoopers charter' in Britain, and Hollande in France calling for new far-reaching powers for the army, will later also be used against workers' struggles and protests.

Hollande's declaration of a state of emergency, including the banning of mass demonstrations, was a convenient measure for him personally considering that many people were directing anger at him in the wake of the attacks and support for him lowered.

Unfortunately a significant part of that criticism has been more under the impact of attacks from the right and far right - trying to make political capital out of the terror attacks - than from a left direction. However, the posing of a socialist alternative has never been more urgent.

The workers' movements in France, Britain and elsewhere need to develop their own class-based position, completely independent of that of the interests and hypocrisy of the capitalist governments and ruling classes. This must include building workers' unity and action against terrorism, wars and the capitalist system itself, which is increasingly marked by inequality and inability to meet the needs of the overwhelming majority of people.

Progress towards socialist transformations is not just desirable, but is a life or death question for some, as the Paris events tragically show. The best response to them is to join the fight for working class democratic organisation and socialist ideas that the Socialist Party in England and Wales is engaged in, alongside Gauche Revolutionnaire in France and all other sections of the CWI.

This version of this article was first posted on the Socialist Party website on 18 November 2015 and may vary slightly from the version subsequently printed in The Socialist.