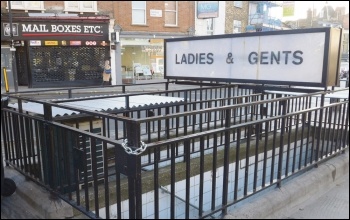 A Labour councillor responsible for closing all his area's public toilets has been caught relieving himself on the street.

His authority has nearly £50 million in usable reserves out of a total £1 billion reserve fund. It could use these, along with borrowing powers, to buy time to build a campaign to win that money back.

This would defend vital jobs and services - and prevent people caught short from revisiting the medieval system of open sewers.

Camden council in north London plans to follow suit. The Labour authority proposes closing some public conveniences and charging for the remainder.

Councillor Merik Apak, the borough's environment chief, said: "It all adds up." When it comes to heaping misery on ordinary people - whether through job cuts or the basic indignity of not having a toilet - it certainly does.