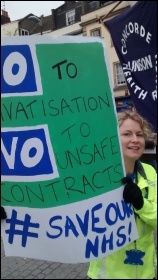 Junior doctors to defend NHS with first strikes in 40 years

The British Medical Association (BMA) doctors' union ballot ends as the Socialist goes to press. It looks like a big majority of doctors have voted for industrial action.

The BMA junior doctors' committee announced three strike days. A 24-hour strike with emergency cover from 8am on 1 December will be followed by all-out strikes between 8am and 5pm on 8 and 16 December. This is the first industrial action by junior doctors since 1975.

Emergency cover is being defined as a Christmas Day service. Emergency cover on all-out days would be provided by consultants, who are not directly affected by this contract.

Consultants support their junior colleagues, understanding Hunt aims to attack them after the juniors. If he could remove doctors' unsocial hours payments, he would find it easier to attack the rest of the NHS workforce.

Hunt has called the doctors' plan "extreme". He is the extremist, wanting to privatise the NHS.

Cutting health workers' pay makes NHS privatisation more attractive to corporations like Circle - which took over Hinchingbrooke Hospital in Cambridgeshire, but found it could not make enough profit.

Junior doctors are in the front line of the Tory onslaught on our NHS. Their fight is our fight! Other health unions should ballot for industrial action, and all trade unions should mobilise their members to support the junior doctors and defend the NHS.

There is still time for other health unions to join the doctors on the second and third strike days. A programme of coordinated, escalating strikes can halt attacks on our NHS - and be the start of a movement to reverse them.