Link to this page: https://www.socialistparty.org.uk/articles/21925 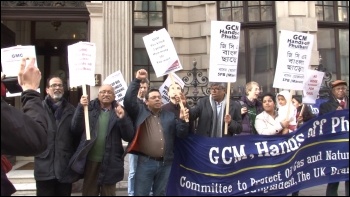 For the last nine years the Committee to Protect Oil, Gas and Natural Resources in Bangladesh has organised protests in central London outside the AGM of coal mining conglomerate Global Coal Management Resources (GCM).

In 2006, a 70,000-strong demonstration against GCM's plans to develop open-cast mining in Phulbari, in Bangladesh's Dinajpur district, was attacked by paramilitary forces. Three protesters died and two hundred were injured. The Bangladesh government withdrew the mining licence in the wake of this atrocity.

Despite the government repudiation, activists fear that GCM will get a deal with the Bangladesh government to begin coal mining in Phulbari. GCM appears to be continuing its attempts to raise funds for this operation. 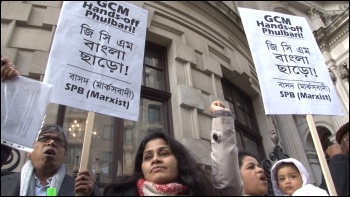 Activists told the Socialist newspaper that they believe that GCM is misleading its shareholders by not revealing its past failures and current reputation in Bangladesh.

GCM's chief executive, Gary Lye, was forced to cancel his plans to visit Phulbari by the District Commissioner and local police due to the 'volatile situation prevailing at Dinajpur's Phulbari' according to Bangladesh's bdnews24.com.

The mining operation would displace hundreds of thousands of farming families, pollute water sources and destroy the local environment - all in the name of profit.

Campaigners read out a 'Notice of Closure' during the protest, calling on GCM to close down its operations in London. Protesters at the AGM pointed out that plans to gouge out more carbon-rich fossil fuels, thereby increasing greenhouse gas emissions, coincides with the recent Paris UN climate change conference which, on paper, agreed to limit global warming over the next century.

In Britain, David Cameron and the Tories have already dropped the 'green crap' (to use Cameron's alleged phrase) by increasing tax breaks for big energy companies while cutting subsidies to renewable energy projects. Most recently the Tory government has slashed financial support for installing domestic solar panels.

The Socialist Party campaigns for the nationalisation of big energy firms like GCM under democratic workers' control and management, ending the profit motive which drives these voracious companies to exploit the neo-colonial world at the expense of the local populations. 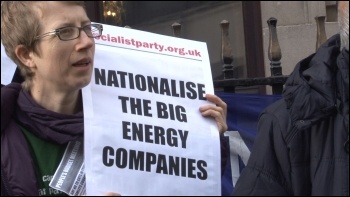 In the putative deal between the Bangladesh government and GCM, 94% of the revenue generated by the planned mine would be taken by GCM, campaigners say, leaving only 6% for the government - together with a destroyed environment and displaced people. It would be daylight robbery.

Public ownership of the commanding heights of the economy would enable the development of a national and international plan of production to phase out fossil fuels and replace them with renewable energy sources, including solar, wind and wave, and the development of new green technologies.