Link to this page: https://www.socialistparty.org.uk/articles/22032 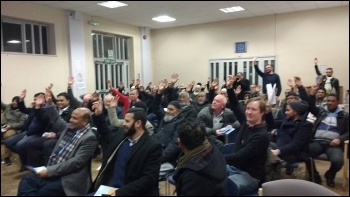 At a buzzing 'people's budget' meeting in Tower Hamlets, east London, 70 people voted to oppose the proposed cuts to Tower Hamlets council services. The meeting had been called by Tower Hamlets Independent councillors and the Trade Unionist and Socialist Coalition (TUSC).

TUSC and Socialist Party representatives argued for councillors to move a no-cuts alternative budget. If passed by the council, this would stave off cuts this year and give time to build a mass campaign and link up with other councils in a national movement to defeat Tory austerity. The meeting voted unanimously to continue to discuss this possibility.

Hugo Pierre, local resident and Socialist Party member, pointed out that the Alpha Grove community centre, where the meeting took place, was scheduled for closure 21 years ago. It was saved by a campaign which included a conference of community organisations that drew up a 'People's Budget for the Isle of Dogs' (the area of the borough where the meeting took place) to present to the council.

Local residents and service users were joined by trade unionists. We heard from a local resident and carer who has launched a petition against the cuts, including the particularly heartless closure of the incontinence laundry service. How outrageous it is that people will now be expected to take heavily soiled items down to the laundrette. 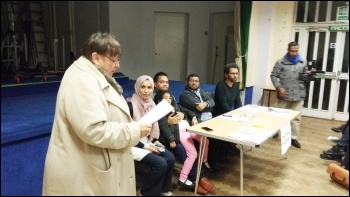 Amanda Bentham, a local teacher and NUT member, described how cuts to children's services and youth services, including the child and adolescent mental health services, will place a massive burden on schools. And schools themselves are facing big cuts.

The meeting was encouraged by the news that Tower Hamlets Labour mayor John Biggs has decided that several planned cuts now won't go ahead.

"Tower Hamlets Independent Group is pleased that we have already forced the mayor into a U-turn on the closure of libraries on Sundays and his proposed dismantling of Mayfield House which supports the Somali women and the elderly in the community.

"The first budget proposals by mayor John Biggs, under his Blairite-dominated administration, will not only hurt residents and their loved ones but will hit them hard in their pockets with a 4% increase in council tax. We will continue to fight hard and stand up for the residents of Tower Hamlets."

Pete Dickenson from the local Socialist Party said that after the mass support for Corbyn both inside and outside the Labour Party, people might have expected Labour councillors to stand up against Tory cuts. Yet to the shame of those Labour councillors it is Tory councillors who are making more noise about cuts to local government! 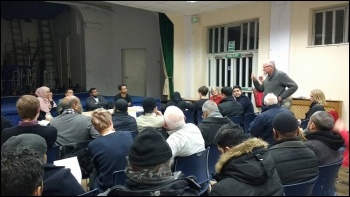 The idea of running our own public consultation on what should go in a people's budget went down really well. We handed round the Southampton TUSC people's budget consultation leaflet as an example of what we could do. Several residents liked it so much that they filled them in then and there. Written comments included: "no cuts!!", "£10/hour living wage", "affordable elderly care", and "affordable housing".

This version of this article was first posted on the Socialist Party website on 18 January 2016 and may vary slightly from the version subsequently printed in The Socialist.